Sometimes fans of a popular book DEMAND a sequel (see Origami Yoda, below), and sometimes the entire series is planned out from the beginning.  Whether a series conclusion lives up to its promise is another story, but all of these sequels have their charms.  Click on the highlighted title of the previous book to read our review.

In Deadweather and Sunrise, our hero Egbert (otherwise known as Egg) escaped from his 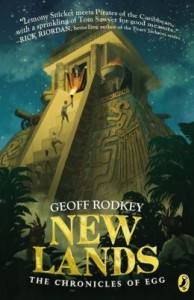 dead-end role as the youngest son of a sad-sack plantation owner and embarked on a life of adventure with a resourceful companion and a treasure map.  As New Lands opens, Egg is having second thoughts.  A thoughtful sort, he often has second thoughts, but that’s better than no thoughts, which seems likely to happen next.  “I hadn’t been clever.  I’d just been lucky.  And sooner or later, I was going to run out of luck.”  He and the former pirate’s cabin-boy Guts are sailing into what looks like certain disaster, with Egg’s arch-enemy Roger Pembroke on his tail and a savage jungle tribe in the near future—provided they even gets to the near future.  But the Okalus (who resemble Aztecs or Incas) hold the key to the treasure map, and the native girl they encounter may be the key to the Okalus.  Or she might be a stab in the back—she certainly carries enough metal and chutzpa to do it.  When Millicent, Pembroke’s daughter and Egg’s true love, reappears, the potential for fireworks doubles.  Most of the action takes place in an Amazonian jungle rather than the high seas, but it’s suitably thrilling—and funny, due to Egg’s singular brand of self-deprecating humor.  It’s also inconclusive, because the final volume in the series is coming up next month: Blue Sea Burning.  At least fans of Egg won’t have too long to wait. 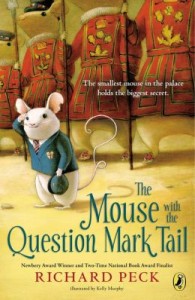 Fans of Secrets at Sea will like this one, even though there’s no direct connection between the two except small rodents and jolly old Victorian England.  Our nameless hero, known as Mouse Minor because of his unknown parentage and small (even for a mouse!) stature, has at least been well brought up by his “Aunt” Marigold, head needlemouse of the royal mews (stables) who has enough clout to get him into a good school with a hand-sewn uniform.  Aside from a notch in his ear and his titular tail, nothing distinguishes little Minor, especially to himself.  Who am I? is his consuming question, and he can think of only one way to find the answer.  Obviously, the Queen herself, whose diamond jubilee is approaching, knows everything about her subjects, and she would be the one to ask.  As in Secrets at Sea, the mouse world (and cat world, for that matter), echoes the human world: “For every human on earth, there is a mouse doing the same job, and doing it better.”  MM will take on some of these jobs for himself, as well as endure many trials and adventures on his way to self-discovery.  The ending may be no surprise, and the characters not quite as engaging (to me) as in the previous book, but it’s a charming story (I’m not going to say “tale”!) very well suited to its age group, and a great read-aloud besides, with fun jawbreaking words like “unprepossessing” and “pusillanimous.”

Mirka is unique among graphic-novel heroes: an 11-year-old Orthodox Jewish girl who has plenty of 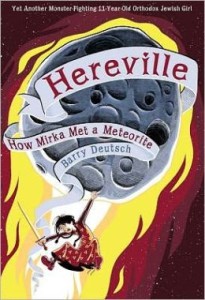 questions about Hashem (God) and family customs, but never lets exploits of derring-do interfere with Shabbat observance.  Her last adventure, How Mirka Got Her Sword, also got her grounded indefinitely, so she spends her time knitting berets for everyone in the family until no one wants to even see another beret.  But finally her stepmother Fruma agrees she’s been grounded long enough—just in time for another adventure.  This one begins with getting her sword back from the troll she won it from originally, but because he doesn’t play fair, complications ensue.  The result is a meteorite hurtling to earth and being transformed, before it hits, into Mirka’s double.  Two Mirkas?!  As everyone comes to realize, one is enough, and each of us is sufficient to live his own life.  The story seems not as focused as the first, but still a lot of fun, with good points to make about identity and family loyalty. 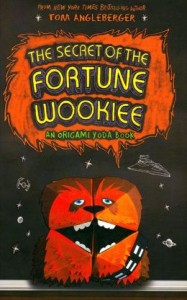 In The Strange Case of Origami Yoda, Tommy and his sixth-grade classmates try to find out if the wise-old-Jedi finger puppet made by Dwight actually got his wisdom from the Force.  Because his cryptic predictions seemed to come true, and his advice always worked out.  Harvey is the skeptic in the group, and for the next installment of this wildly-popular series, Harvey constructs his own finger puppet in the form of “Darth Paper.” The power of the Dark Side comes into play as Darth seeks to undermine Yoda and get Dwight expelled, or at least suspended.  Tommy starts another case file to collect evidence of Yoda’s wisdom and his positive influence on the school.  Will the Dark Side prevail?  Well . . . The Secret of the Fortune Wookiee opens with Dwight attending another school and an origami figure of Chewbacca being wielded by Sara, Tommy’s crush.  Chewie can only speak in growls, but fortunately Han Foldo is there to interpret—even though the kids still have to figure out what Han means.  Parents may be a little put off by all the references to the Force and its mysterious wisdom, because true wisdom, as young readers should understand, comes from one source only.  That said, the puppets’ advice about humility, hard work and taking no shortcuts is suitable for any age, especially the in-between, formative ages of middle school.  Questions about faith and the object of faith prevalent in the original (see our review) still apply though not so directly, while the author’s margin doodles and hand-lettered asides add to the appeal. And the Force goes on: Princess Labelmaker to the Rescue! is the latest installment in the series, just published this month (and unread by me).

ChittyChitty Bang Bang and the Race Against Time, by Frank Cottrell.

This sequel to Cottrell’s retelling of Ian Fleming’s classic has been around since last March, but I haven’t had a chance to read it.  Betsy has, though, and we’ll hope to hear from her soon.

The royal intrigue that began with The False Prince and The Runaway King concludes with The Shadow Throne, new this month.  Prince (now King) Jaron, the precocious and sagacious teenage hero of the previous two books, struggles to hold on to his newly-acquired throne as warclouds threaten. Is it as good as the previous two?  Don’t know, but will report if it’s worth reporting.  In the meantime, you might want to check it out for yourself.

Mr. and Mrs. Bunny: Detectives Extraordinaire travel from their native British Columbia to London in this follow-up.  Mrs. Bunny has decided on another career change: she wants to be Queen. And wouldn’t you know, their almost-daughter Madeline is along for the ride, as her hippie parents have haplessly inherited an English sweet shoppe.  It sounds like just as much fun, and just as little sense, as the Bunnys’ first outing.