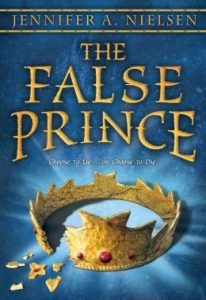 When we first encounter the orphan known as Sage, he’s running full-tilt with a cleaver-waving butcher at his back and a stolen beef roast clutched in his arms.  It seemed like a good idea at the time, especially since hunger is such a steady companion, but now it’s nip and tuck whether Sage will be able to elude the cleaver before getting carved up himself.  Fate intervenes in the person of Bevin Connor, a gentleman who “rescues” the boy and offers an intriguing alternative to thievery.  Trusting the man no more than he trusts anyone else, Sage refuses—only to be kidnapped by that classic device: a blow to the head.

Connor’s plan answers a political crisis: the King of Carthya is dead, along with the Queen and the Crown Prince.  It’s not generally known, but Connor believes they’ve been poisoned, and the only obvious heir to the throne, the boy prince Jaron, disappeared long ago.  Supposedly he was captured and murdered by pirates.  But if Jaron came back and claimed his crown, Carthya could be rescued from civil war and the loss of many lives.  All Connor needs is a suitable candidate for the role of prince, which is why he’s been combing the kingdom looking for boys who would match Jaron’s age and general physical characteristics.  Is Connor acting from noble or selfish motives?  That’s one of the questions dogging Sage as he reluctantly joins the band of three other boys who will hide out at the man’s estate and train for the role.  If selected, he’ll be king.  If not, he’ll be killed.  Connor is honest about that; once he’s chosen his candidate, he can’t leave alive the also-rans.

This is an irresistible setup: adventure, intrigue, pseudo-medieval setting, high stakes.  And yet it could easily collapse into cheesiness, like an old Errol Flynn movie, were it not for the central character.  I was prepared not to like Sage–at first glance, he’s the typical put-upon, smart-mouth, cocky, and rebellious hero beloved of restless teens the world over.  But there’s more to him, including a solid moral core that enables him to choose the right thing in very difficult circumstances.

The author gives him a cracking good story in which to grow into his character–an old-fashioned adventure yarn with plot twists and treachery and moral dilemmas (think Game of Thrones without the sex).  That hit on the head is not the only classic element.  Gender roles are defined rather traditionally here.  The female characters are strong, but they don’t grab swords or swing from cables or drop bad guys with roundhouse kicks.  They do what girls do best: develop relationships and loyalties and embody that strange irresistible quality that makes men—or some men, at least–act better than they would otherwise.  It probably wasn’t intentional, but it’s refreshing.

The False Prince gets Sage into the palace, by a plot twist I can’t reveal.  The Runaway King, volume two in the series, propels him out again, and for the first few chapters a reader new to the series will have a lot of catching up to do.  But once it’s up and running, the sequel holds up very well, with more surprises and skullduggery.  Two things irritated me, though: for one, Sage possesses a level of cleverness, political savvy, and brass way beyond his fifteen years.  Learning to survive on the street could account for some of it, but not all.  I would have found him more believable–especially in view of the developing romantic angle–if he were a little older, or a bit more fallible.

Second, I found myself trying to figure out the religious underpinnings of this imaginary world because, even though there are churches and priests, there doesn’t appear to be a god.  When characters make reference to the supernatural, it’s always in terms of devils, e.g., I had to keep moving forward, and if the devils were willing I could go home again.  I understand such terminology in terms of cursing, like “May the devils have you,” but not in place of the way people would normally refer to God or the gods.  I don’t think the author means anything significant by it, such as a demonic view of the world to be revealed in Book 3, but it occurs often enough to wonder just what she does mean.  Even so, the books are good clean fun with some valuable flashes of insight, and their popularity indicates that kids today (and their parents) don’t need sex or the supernatural to enjoy a good story.  Here’s a one-line review from Barnes & Noble: “This book destressed me and made me happy.”  Any author would be happy with an endorsement like that.

For a similar series, see our review of Deadweather and Sunrise, and be sure to follow the links.