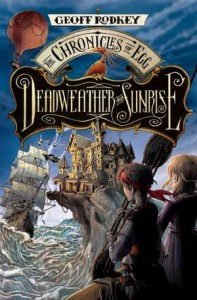 Thirteen-year-old Egbert Masterson, or Egg as he will soon be called, is the youngest son of a glum and taciturn plantation owner on Deadweather Island.  The product of the plantation is ugly fruit, and instead of slaves old Masterson hires pirates for labor—those “who’d lost too many limbs or eyes or organs to crew a ship.”  Like Cinderella, Egg is tormented by two older siblings and life doesn’t seem to hold much promise for him: “I knew the world was out there.  I just didn’t see a place for myself in it.  And even if there might be, I had no idea how to go about finding it.”

With thoughts like that, Egg is cued up for a big adventure, and what happens is something like Treasure Island meets Candide (the naïve hero of Voltaire’s novel).  Everything changes for Egg the day his father comes down from a visit to the local volcano with a very preoccupied look, and hauls the family off to Sunrise Island on short notice.  There, after a visit with his lawyer, Dad meets wealthy planter Roger Pembroke apparently by chance.  Pembroke takes a very friendly interest in the whole family, and Egg finds himself taking a more than friendly interest in Pembroke’s beautiful daughter Millicent.

If you’ve ever wanted to dig into a good old-fashioned adventure yarn, this is it.  There’s never a dull moment as Egg goes from bad to worse and falls in with some colorful characters, such as Guts, the semi-deranged cabin boy who becomes an ally, the legendary pirate Burn Healy, and the bloodthirsty pirate Ripper Jones.  Millicent is a spunky heroine with some blind spots, but also a touching vulnerability.  After getting turned around on the ocean one night she’s surprised to see the sun come up in the direction she thought she was sailing: “Impossible.  I had us going west.”  “What’s more likely,” Egg demands: “the earth turning in the other direction, or you went the wrong way?”

Both have plenty of growing up to do, which for Millicent means stepping down and for Egg means stepping up.  He’s shocked to discover that the well-heeled of Sunrise Island can be as vicious in their way as the pirates of home.  “I’d always consoled myself, when I dreamed about life outside of Deadweather, with the thought that somewhere there were better, more civilized people, who wouldn’t turn into a pack of snarling dogs because a man who was good with words whipped them into a frenzy.”  Though Millicent is of much finer stuff than a snarling dog, she’s not the answer to all his problems.  “Now it was obvious, to both of us, that she wasn’t invincible. . . . Which meant there was no getting rid of my fear.  Whatever happened, I was going to have to carry it with me.”

It’s an alternative world rather than a fantastic one—the geography is other-worldly but the milieu, aside from a few speech anachronisms (like “okay” and “whatever”), is much like the world created by Robert Louis Stevenson.  The theology might be similar too, to judge by all the swearing “by the Savior.”  Everybody needs saving in this world, and the story could be grim except for the robust tone and the spirited adventurousness suggestive of an earlier day.   This is Volume One of the Chronicles of Egg; I’m looking forward to Part Two.  One caution: the relationship between Egg and Millicent takes a romantic direction too soon, and they’re too young.  It’s rather sweet, and can be seen as Egg’s awakening to the nobler aspects of life that he’s been so long in ignorance of.  But parents of younger readers should be advised–see my comment below.