Retro Reads: The Sword in the Stone

This week we begin a series of occasional posts called Retro Reads: those modern-day classics you may have missed in your teen years or before you were even on the radar screen.  We’ll do this mostly by author: Beverly Cleary, E. L. Konigsburg, Elizabeth Speare, Natalie Babbitt—and any favorites you’d like to suggest?  We launch the series with Lloyd Alexander, best known perhaps for his High King books.  These are a classic example of high fantasy—medieval-like settings with wizards and knights and mysterious ladies.  But there’s more to Alexander than that, as we’ll see.  I (Janie) haven’t read much of him, so I’m going to leave this retro author to my capable colleagues and take a backward look at the one sword-and-sorcery epic I gravitated to as a child. 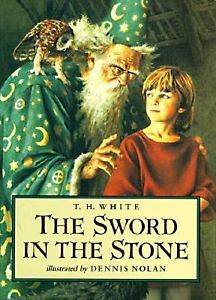 Even though it’s the source of a Disney movie, its main character is a child, and it’s marketed to children (the edition we feature includes color illustrations) I’m not sure it was really written for children—certainly the later version (see below) was not.  It starts like this:

On Mondays, Wednesdays and Fridays it was Court Hand and Summulae Logicales, while the rest of the week it was the Organon, Repetition and Astrology.  The governess was always getting muddled with her astrolabe, and when she got specially muddled she would take it out on the Wart by rapping his knuckles.

When I picked up this book at the age of 11, I understood Mondays, Wednesdays, and Fridays, and rapping knuckles, but very little in between.  Nonetheless I kept reading, perhaps because my sister recommended it, and I wanted to like everything she liked.  It purports to tell the story of King Arthur’s boyhood—“Wart” is the nickname his foster brother Kay gave him, because it more or less rhymes with “Art.”  In spite of Kay’s contentious personality, the boys get along well enough and Wart’s life in the castle is happy and carefree.  When Sir Ector decides he must find a proper tutor to replace the unstable governess, Wart fears his running-wild days are numbered–but fortunately he gets lost in nearby Forest Sauvage and happens upon a cottage inhabited by an eccentric old man who claims to live backwards.  This, of course, is Merlin the magician, a figure both comic and wise.  Though engaged to teach both boys, Merlin knows he’s training a king (one advantage of living backwards, though he gets terribly confused at times), and part of Wart’s education will be his transformation into various animals to learn their ways and social customs.  These animals include totalitarian ants, military hawks, and a libertarian badger.

To get just to the beginning of Merlin’s tutelage takes about 40 pages densely packed with details of medieval life and accoutrement (including, for instance, an entire page and a half listing the contents of the magician’s cottage).  An editor would never let such excess pass today, but I loved it.  At first reading I skipped a lot of the long paragraphs filled with references I didn’t understand in order to get to the good stuff, like the animal interludes and the antics of King Pellinore and the Questing Beast.  But there would be many more readings from age 11 to 21, during which I took the time to linger over those lists and savor those descriptions.

T. H. White was the rare humanist who liked individuals (a few of them, anyway), but was sour on humanity. After WWII, one could hardly blame him, but without a religious compass to keep him balanced he fell far to the side of misanthropy. As a result the second version of The Sword in the Stone–the one he included in his Arthurian magnum opus, The Once and Future King–is more pointed and skeptical than the original stand-alone version. I read the late version, which leaves out Madame Mim and her wizard’s battle with Merlin (a high point of the movie) and adds a long (and boring, I’ll admit) interlude that Wart spends among a pacifist tribe of wild geese. Pacifism was a key theme of White’s Arthurian epic, even though he lavished attention on the single-combat skills of jousting and sword-fighting.

Though the historical details and inventories are accurate, the history isn’t—it’s like an alternate Middle Ages that puts Arthur around the time of Richard the Lionheart and allows anachronistic references to communism and psychology.  These jarring details bothered C. S. Lewis; they didn’t bother me at all.  Long set pieces like Christmas at the castle and the Boxing Day boar hunt are so rich and lovingly depicted I knew in my bones a medieval Christmas must have been just like that.  I also picked up an appreciation for sympathetic characters, of the sort that White would develop more fully in The Once and Future King.  Some books are read; some are experienced, and for me The Sword in the Stone falls into the latter category.  It’s a good read-aloud too, though I would suggest making some cuts.

And now for Lloyd Alexander: tomorrow Betsy writes about the Prydain Chronicles.  On Thursday, Hayley explores the Vesper Holly series, and Friday is picture-book day with Megan.