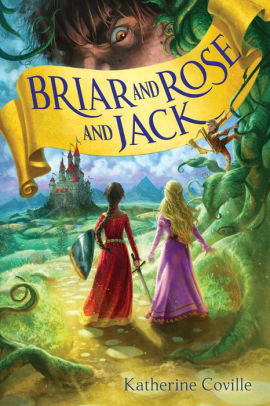 Briar and Rose and Jack mixes fairy-tale motifs with clear themes of good and evil in a magical and satisfying adventure.

King Warrick and his wife were not expecting twins, but the king is mightily relieved when, after the first baby emerged with an misshapen face, the second is beautiful and perfect. Under the advisement of Bishop Simon, the king is easily persuaded to present pretty Rose as his daughter and heir, and ugly Briar as the offspring of a noble couple recently deceased. The midwife, who has some magical powers, feels an attachment to Briar and is determined she won’t be left out when the good fairies arrive to bestow their magical gifts on the baby. So Briar gets a share of Rose’s blessings without anyone knowing. Then the gray fairy appears, furious at the king’s failure to invite her to the party, and hurls a death curse at the child—death at the age of sixteen, after pricking her finger on a spindle. Things get a bit confused there—did the curse land on Briar or on Rose?

As the girls grow up, an evil giant begins making raids on the kingdom, demanding gold and grain. The king gives in every time, making his subjects poorer and hungrier while hoarding goodies for himself. One brave lad named Jack decides that something must be done . . .

As she did in The Cottage in the Woods, Katherine Coville mixes familiar elements of fairy tale with literary and even biblical themes (such as “the last shall be first”). Unlike Cottage, however, the plot moves quickly and the third-person narrative is lighter in tone. The twins’ relationship is loving but complex, developing over the span of sixteen years in which both have to deal with the different burdens of ugliness and beauty. Unlike many fairy-tale reimaginings, heroes don’t come in for reevaluation against sword-wielding heroines. The boys are properly valiant, resourceful, and self-sacrificing. Villains are not so well-rounded. The giant is just a brutal, dimwitted giant, but the king is utterly feckless and the bishop is cruel, greedy, and foolish. This is an indictment of the man, not the church, or religion in general, as other characters display deep faith. The unalloyed villainy throws heroism in sharp relief, to make for a very satisfying ending.

For more fairy-tale reimaginings, see Hayley’s thoughts on “Reading Robin McKinley” as well as our month-long deep dive into the Christian understanding of “Beauty and the Beast.” We’ve reviewed another version of Sleeping Beauty that’s set in a New England mill town: Spindle.

We are participants in the Amazon LLC affiliate program; purchases you make through affiliate links like the one below earn us a commission.