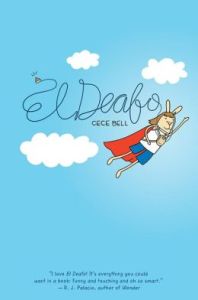 Bottom Line: Author/illustrator Cece Bell recounts her experience growing up deaf in this graphic-format memoir that entertains and enlightens.

Cece Bell is the main character of her own story, told in graphic-novel format with all characters pictured as rabbits.  The story begins with a short but severe bout of spinal meningitis at the age of four. Cece seems to be improving, but after two weeks the truth is apparent: her hearing is gone. From that point (as she explains in the appendix) she was and is severely-to-profoundly deaf. The first few pages, which show the little girl’s ability to hear gradually going, are reminiscent of that early scene in The Miracle Worker when baby Helen Keller’s world dims to dark silence. But Cece is still a normal kid, with all the sparks, quirks, hesitations, joys, and anxieties of normal kid-hood, and her memoir is a delight. Once she starts first grade, her constant companion in school is her “Phonic Ear,” a type of amplifier with wires that hangs around her neck. All of her teachers complement the apparatus with a microphone that puts their voices right in her ears. Of course she’s embarrassed about wearing a machine on her chest, but one teacher’s absent-mindedness gives Cece an advantage that seems almost super-human. While Mrs. Lufton is wearing the microphone, Cece can hear her wherever she is in the school: the teachers’ lounge, the lunchroom—even the bathroom! (You can just imagine how delighted a six-year-old would be with this discovery.)

Cece begins thinking of herself as “El Deafo,” a superhero who knows the secret councils of the godlike teachers. But El Deafo could use a sidekick, and finding a best friend isn’t always easy. Other normal-kid experiences involve disappointing sleepovers, first crushes, and hurt feelings, and though Cece becomes accustomed to her disability, occasionally a bad attitude pops up—like the time she refuses to learn sign language. Along the way she experiences the common misperceptions that hearing people have about those who can’t hear. But all in all, it’s a wonderful life, and she’s done well. Fun fact: Cece Bell wrote the Rabbit and Robot early-reader series and is married to Tom Angleberger, the Origami-Yoda guy.  UPDATE: El Deafo is a Newbery Honor book for 2015.