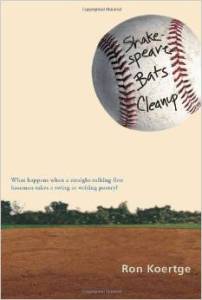 One-line Summary: Kevin, age 15, learns to deal with difficult life issues by expressing his thoughts in poetry. An entertaining introduction to poetry forms.

Shakespeare himself doesn’t have much to do with it; it’s all about poetry, though Kevin must hide his growing enthusiasm for literature from the guys. He’s last season’s MVP, now stricken with mono at the beginning of the season. What’s more, as we’ll learn, his mother has recently lost her fight with cancer, and Kevin and his dad are in the throes of adjustment. What’s a champion base-stealer to do? Immediately after the mono diagnosis, Dad (a writer) gives his son an ordinary composition book and suggests he might want to write some things down. Shortly after, Kevin sneaks a book of poetry forms from his dad’s library and starts experimenting. Poetry has the virtue of being short, but it’s also very challenging, as Kevin tries his hand at the simplest forms (haiku), the most challenging (sonnet), and the lesser-known forms like sestina and pantoum.

As we literary types know, the act of writing draws out the writer’s true feelings and helps him understand and deal with them. But Kevin’s mom actually seems to get short shrift for one so recently departed; his most pressing concern, besides the baseball season he’s missing, is a growing interest in girls. As his health improves he gets out more and meets a few—particularly Mira, a girl from a traditional Latin family whose dad hovers like a hawk. Kevin is a bit too obsessed with making out (baseball metaphors ahead) for a parent’s taste, but he doesn’t go into detail and his interest is pretty normal for a 15-year-old. (His girl troubles apparently double in the sequel, Shakespeare Makes the Playoffs, which I have not read.)  Shakespeare Bats Cleanup is a great way for young teens to explore formal poetry (all the forms are explained in an appendix) and even try hitting a few out of the park.

Also by this author: Coaltown Jesus