It’s not often that we are privileged to read literary gems from both father AND son. But that is indeed the case here; to make it more interesting, both are tackling Beowulf. Interest piqued? I hope so because both of these books are truly outstanding. The first is an action-packed adventure novel full of the mysterious (and Beowulf!), the second a modern rendering of Beowulf. 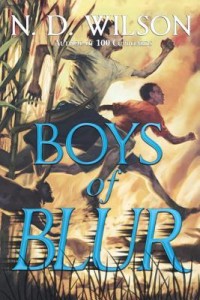 I’m a fan of N. D. Wilson’s middle grade/young adult novels. A big fan. The kind of fan that rushes to read the latest installment of whatever the man chooses to write because I know it will be a rich experience on every level. Wilson consistently reckons with the good, the bad, and the ugly in his works. But he raises it a notch: his good guys are sacrificial and pay a high price for their heroism. The bad guys are as wicked as they come. And the ugly? Well, this latest novel takes ugly to new heights (or depths, as it were).

A quick read at a mere 208 pages, Wilson wastes no words and plunges us into Charlie Mack’s complicated world. A funeral has brought Charlie, his mother, sister and stepdad back to a small, football-lovin’ Florida town on the edge of the swamp. Small towns have lots of baggage, and Taper is no exception. Old hatreds are rising to the surface, racial tension mounts (Charlie’s abusive father is white, and his stepfather is black), former football rivalries reappear, and strange inhuman creatures are seen in the swamp. Charlie meets a cousin he didn’t know he had (“Cotton”), and the two get sucked into a whirlwind adventure that pushes them to the brink.

Wilson’s novels land in that sweet spot that targets 10-14 year olds. His books are complex, as complex as they come, and stand up well in the hands of sophisticated readers. Yet, he somehow keeps his books within reach of most middle school students. In Boys of Blur, he weaves in elements of Beowulf beautifully. This is more than a Beowulf retelling, though. Rather, Wilson uses the old story to offer a framework for a new legend, a new look at what it means to sacrifice, what it means to have evil giving birth to creatures that do its bidding, what happens when men are caught up in sin, and what it means to put all that aside in the name of forgiveness. This is a gritty book, but those who know and enjoy Beowulf will thoroughly enjoy recognizing Grendel’s mother, Beowulf, Wiglaf, and the other “stars.” For those who aren’t familiar with the original, this will surely be a terrific introduction, giving flesh to a tale that must certainly have been gritty, heroic, and fast-paced for its original hearers.

I received an advance copy from the publisher in return for a fair review. The following quotations will give you a feel for Wilson’s style although they may appear differently in the published copy:

A breeze dragged quiet fingers across the back of Charlie’s neck and his skin sprang into bumps.

Feelings had exploded inside him without asking permission, and their sour tracks still ached behind his breastbone.

Wilson peppers this book with otherworldly creatures–evil creatures that resemble modern zombies (although that gives the wrong impression slightly). Still, sensitive young readers may wish to wait a bit. That being said, Wilson has also saturated his writing with his Christian worldview in addition to the ancient literature in which he has steeped his mind. This final quotation is a terrific example of how Wilson has taken Beowulf out of its pagan roots and filled it with biblical hope:

[one character]…is dying, honey….Short of a miracle, he will be gone by midnight. But he is ready. His dreams are of peace. He is in the sun. He smells the sea. You will see him again when your own time comes, and the two of you will run together without fear, you will run on legs like wings made of joy and you will never grow weary.

It’s worth noting that Wilson’s father, Doug Wilson, makes the argument that Beowulf is a Christian work–note Janie’s comments below!

Beowulf: The Real Thing for Teens/Grown-Ups 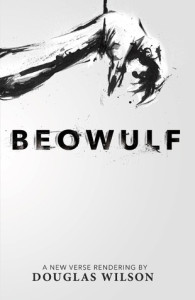 The literary world is awaiting a new translation of Beowulf by none other than J.R.R. Tolkien (yes, he’s dead; it was edited by his son Christopher) this fall.  Until then, we have a new version by N. D. Wilson’s father.  In his forward, the author explains what he means by “verse rendering”: he closely compared the five leading translations from Anglo-Saxon, then paraphrased in English carefully arranged to communicate both the poetic form and the vigor of the original language.   He explains that each line in the poetry form is called a stitch, commonly broken in to two hemi-stitches.  The poetry works mainly by alliteration, wherein the first stressed syllable in the second hemistitch must alliterate with the two stressed syllables in the first.  This is a pattern he manages to maintain throughout.  Here’s an example, from the Eleventh Fitt (a “fitt” is what we would call a stanza):

But conquest and comfort were coming to them–
God’s war-loom was weaving to the Weders this victory.

Like most epic poetry, this version of Beowulf should be read aloud (at least parts of it) to appreciate the force of the language.  In his concluding essay, Wilson attempts to settle the long-running argument whether the poem is basically pagan with a sprinkle of Christianity, or essentially Christian with a zest of paganism.  He sees it as indisputably Christian, but written within living memory of a time when paganism was the dominant worldview. Beowulf reflects a crucial historical hinge, and the protagonist is a classic “unChrist”—a noble hero whose nobility is finally all he has (I had similar thoughts about Jonathan Stroud’s Bartimaeus series).  The essay is not to be missed, and the poem acquires new relevance.

Beowulf and N.D.Wilson are no strangers to RedeemedReader! Check out some of our teaching tools for Beowulf, the Hero’s Journey, an audio version of Beowulf for kids, reviews of ND Wilson’s Ashtown Burials series, currently in progress (The Dragon’s Tooth, The Drowned Vault, and Empire of Bones), ND Wilson’s 100 Cupboards series, and a historical fiction adventure set during Anglo-Saxon times by Douglas Bond.

Cover images thanks to goodreads