Who Do Men Say That I Am?

Christmas brings into focus the mystery of the incarnation, when God, in the person of Jesus Christ, took on human flesh in order to meet the most pressing human need.  I’ve been reading through Job again this December, and I’m impressed with how often the cry for an intercessor comes up.  Job, who did not understand the deep unrighteousness that lay under his surface righteousness, pleads at least four times for an intercessor.  Elihu takes up the theme again at the beginning of his long speech.  In Jesus, the intercessor appears; he who not only dies for us but lives for us, both on earth and forever afterward before the throne of God above (Heb. 7:25). 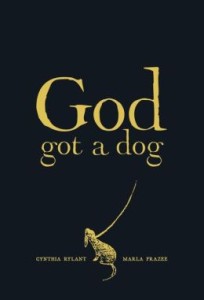 s a human.  Ten years ago beloved children’s author Cynthia Rylant published a little volume of poems called God Went to Beauty School, in which she pictured an amorphous being who kind of made the world and kind of didn’t, because it sort of made itself, but he gets a kick out of things like manicured nails and new furniture, and learns a lot about human nature from cable TV.  “God” is back in a repackaged, illustrated version of the same content: God Got a Dog (Simon & Schuster, 2013).  He never meant to./ He liked dogs, He/ liked them ever since He was kid,/ but He didn’t think/ He had time for a dog now . . .”  “God” has his little faults, but he means well and comes out generally looking like a loveable doofus.

Of course this is ridiculous (and worse), but GGaD got enthusiastic reviews from magazines like Booklist (“Seeing God in new ways allows children to think about their relationship to Him or Her differently”) and Kirkus Reviews (“[Rylant’s] Gods are fat, skinny, joyful, contemplative, worn-out…. Funny, devout and oh, so human; this collection hits home.” Yes–altogether too close to home).  The earlier book was text only; the newer version aids the children by picturing “god” as a middle aged woman, a potbellied man, a tattooed dude, etc.  It’s supposed to expand their minds, but of course, it will shrink those minds by reducing “god” to kid size.

A somewhat more orthodox view shows in Coaltown Jesus, by Ron Koertge (Candlewick, 2013).  This is another slim volume in verse, but instead of collected poems it tells the story of 15-year-old 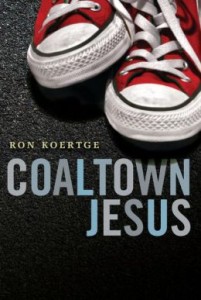 Walker, whose beloved older brother Noah has recently died of a drug overdose.  Walker prayed, not knowing if anybody was up there, and the next thing he knows, Jesus is standing in his room.  “You prayed,” Jesus said.  “I showed up./ I would have been here sooner, but traffic on I-55 was awful.”  That’s kind of an interesting take, once you think of it: since the incarnation, Jesus is fully God and fully man, and when he walked on earth he experienced certain human limitations.  Coaltown Jesus has a laugh like an earthquake and a penchant for cryptic speech; he likes dogs (of course), ice cream, old people, and life.  “It teems, doesn’t it?  It just does.”

Reviews label this book as “irreverent” but that’s just what reviewers say when a depiction of divinity doesn’t match their stereotype.  The author appears to like Jesus a lot, and even adheres to some biblical formulas re: the trinity and the dual nature of Christ, which Walker has a hard time understanding (“You’re not the only one,” says Jesus).  But this divine Son seems to have usurped the Holy Spirit’s role as comforter; he’s here to help everyone feel better about life and themselves and God.  He’s not a redeemer–though he remembers the nails (“they still give me the shivers”), his hands don’t carry their prints—and still less is he a judge.  Devout readers will be put off by his admission of making out with a hometown girl, though “only twice” (He was tempted in all ways as we are?) and his memory of the crucifixion, which he jokes about (For the joy set before him?), but the undermining goes deeper than mere “irreverence.”  Young readers who don’t know him may decide they like him, without a clue that “liking Jesus” was not the point of his coming.  They may also feel assured that they are as innocent and pure of heart as Walker and his mom and many of the residents of their old folks’ home—after all, “Jesus” says so.  And Jesus is pretty much okay with what they do, so long as they don’t mean any harm by it.  Everybody needs acceptance and love, after all.

The verse and the voice are masterful—beautifully understated, with the occasional turn of phrase or figure of speech that startles and enhances.  But ultimately employed deceitfully.

Neither book is recommended, but possibly useful as a window of how our culture desperately wants to think of God, and so deceives itself.  Let him come as He is, otherwise we have no hope at all.  Come, Lord Jesus!

And Merry Christmas to all our readers!