Words and Pictures: a Talk with Doug TenNapel 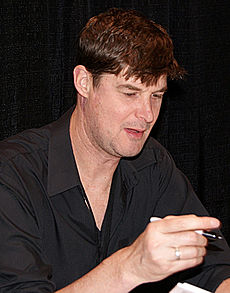 homeschooling dad.  Doug TenNapel, California-born and bred, began his career as an animator and moved into video game design.  In that world he’s probably best known as the creator of Earthworm Jim, a character who inspired a toy line and cartoon series.  His career in video has included work for movies and especially television, and his first comic book series, GEAR, evolved into the Nickelodeon cartoon Catscratch.  His children’s book series, The Strange Kid Chronicles, is now out of print, but he’s making even greater strides with his graphic novels for kids: Bad Island, Ghostopolis, Cardboard, and Tommy Rex (available this June).  Busy as he is, he took time to share insights with us on the pitfalls of the graphic genre, as well as the advantages:

RR: What are the special challenges of visual vs. verbal storytelling?

DT: It takes a lot more time to draw a smoke-filled room, top lit, and full of salty characters than to write about that room. Words are, ironically, a better way to produce images in the mind because our minds are so good at filling in pictures after a description of just a few words. So it can take me two hours to draw what I could describe in a sentence, and your mind would populate it with far better details, atmosphere and emotion than I could ever draw.

So what are the advantages or strengths?

In the hands of the right artist, visuals force the will of the artist on the viewer. I think of my drawn characters as ensouled beings, so when you look at their eyes, it’s more like real life when you look into someone’s eyes. Further, if for some reason you have an undeveloped imagination and you have a hard time seeing what a mile long, flying, space eel can do to a small farm town, I can show you. From that moment on, your mind has an image of that visual that is similar to how it stores non-fiction moments in life.

I think this is where most artists fail to grasp our moral responsibility with the images we create. Our fantasies are stored in the same place as our real life experience. It’s why fiction does its work on us, and why even Jesus could use a parable just as effective as his real life work.

Do you think an artist has more responsibility in this area than a fiction writer?  Or to put it another way, do the pictures of an artist have a greater hold on the consumer than the words of an author?

There is an immediate impact that art provides that doesn’t take as much work to grasp as mere writing. But other than that it would be easy to make a case that words can more thoroughly describe an esoteric feeling that would require a higher skill of artistry to pull off visually. We’re getting at the key differences in mediums of written stories vs. sequential art story telling. When I write a story, I’m given a certain number of tools and it’s not a problem to tell a compelling story. And when I’m telling a story in the graphic novel medium, a group of those tools are removed but I’m given a different set to use. It would be foolish to make a graphic novel try to ape a traditional novel. That’s not negotiating the strengths and weaknesses of the tool box. Both mediums are flexible enough to handle some of the traits of the other if one needs to “cheat”. I could interrupt my graphic novel with a huge page of written text. Likewise, a novel can be so heavily illustrated so that the pictures take over the storytelling as in Selznick’s Hugo Cabret. We have a long history of blending words and art.

But I find art more seductive because we’re so visual. Even written books are just trying to do what comics already do; they’re 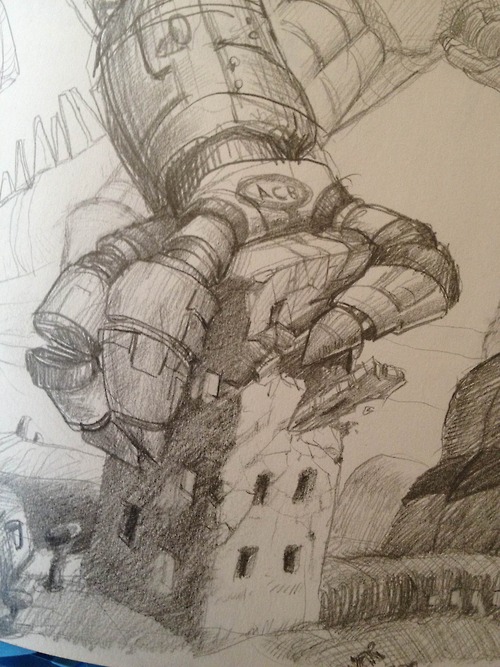 trying to produce a sequence of images and events in your head. The visual artist has a slightly higher responsibility because it’s easier to seduce with an image than with a word. They say a picture paints a thousand words, and I can put thousands of words in your head in an instant of looking at one panel of a graphic novel.

What graphic novelists do you most admire today?

Do you have any recommendations for our readers?

The books by the above authors would be a fun place to start: Hellboy, Bone, Maus and Axe Cop. But I recommend all of those with caution because I know the sensibilities of your readers so well.

Now this is where I have to address our culture, and particularly the divide between your readers and where pop media is at today. Remember that I’m saying this as a father of four homeschooled kids. We’re a conservative Christian family, but I’m also a rare creator of pop media across a number of disciplines: video games, TV, movies and graphic novels.

So I’ll start by telling fellow home-schoolers that there is little to nothing great to grasp in our culture today. Almost all of the material my own kids read are the classic books that are well over 50 years old. When I let them watch TV or comics, it’s usually the most insipid, uninspired, lame nonsense known to man. My kids read Garfield out loud to me and I cringe.  They read Calvin and Hobbes and think Calvin’s obnoxious actions are a role model, not the funny commentary on how outrageous some kids act, which I believe is how it was intended to be read.

In general, when we watch TV we’re all getting dumber. There are very few points of modern culture where parents and teachers will actually get a bigger grasp of the world around us by taking in eternal truths. I write every one of my books with true things in mind.

I generally think most artists make their books thinking they’re telling the truth. The problem is that we disagree about what we think is true, so that an author who is a nihilist or a secular progressive will think one thing is appropriate for a 4th grader while I might think something else is appropriate. My books see the traditional family as an ideal, while some authors think tearing down traditional fathers is an ideal. I have no problem with my kids watching the violence in Lord of the Rings because it’s always put in the context of clear depictions of good vs. evil, while some parents would be horrified that some of my good characters would kill other bad characters.

That said, I recommend all of my Scholastic graphic novels to any family; Cardboard, Bad Island, and Ghostopolis, and I also like think they’ll find a lot of love in Jeff Smith’s Bone, Ben Hatke’s Zita the Space Girl, Raina Telgemeier’s Smile, Jake Parker’s Missile Mouse and Kazu Kibuishi’s Amulet series.

Any sequels planned for Ghostopolis or Cardboard?
I have some ideas outlined for sequels of those titles, but I generally like to create new stories, over doing sequels to previous ones. Some day I need to develop the worlds I already created, and those books are top candidates for a sequel.

I read Cardboard because it received top honors from Kirkus Reviews (the reviewer especially liked its philosophical underpinnings).  Knowing nothing else about you, I was intrigued by the book’s dedication: “To the Chestertonians.”  Anybody who reads Chesterton must have some redeeming features!  Who are the Chestertonians?

Just over three years ago, Ethan Nicolle (Axe Cop) and I were reading and discussing some of G. K. Chesterton’s works. We already smoked pipes together, and we knew of a few other fans of Chesterton who were friends at church or working in Hollywood. We started reading Chesterton out loud together at my house on Sunday afternoons in the warm California sun. Before long, the group got up to about 13 guys and we went through Chesterton’s more popular works;  Orthodoxy, Heretics, The Everlasting Man, In Defense of Sanity, What’s Wrong With The World, Thomas Aquinas, The Man Who Was Thursday, etc. Our ritual was to smoke pipes (and cigars), drink whiskey and dark beer, have a meal together and read. It became one of the most intimate fraternities I’ve ever attended. We argued over politics and faith, and while most of the group were conservative Christians, we had the outlier non-believer, liberal and even had a woman show up once or twice!

Many thanks to Doug for spending time with us!  If you’d like to know more, here’s the official website.  You can also follow him on Tumblr.  For more on the comics scene, see yesterday’s review with its plethora of links.