For some folks, graphic novels are actually a discipline to be learned—their eyes don’t know where to go first and they tend to jump from word to word.  It takes a little effort for them (okay–for me) to slow down and glean from the pictures.  But we all know people, of the male persuasion particularly, who are all over graphic novels.  I’ve come to understand that they are an art form to be respected, with strengths and weaknesses all their own.  And lately I’ve discovered a little cadre of Christian graphic novelists who write and draw for kids.  Ben Hatke of Zita the Spacegirl is one, and I hope to catch up with him later.  But recently I interviewed Doug TenNapel, a Christian homeschooling dad and artist who has made a name for himself in the extremely competitive comic-book-and-video-game market.  He shares some of his insights with us tomorrow, but today we’ll look at two of his recent novels for Scholastic. 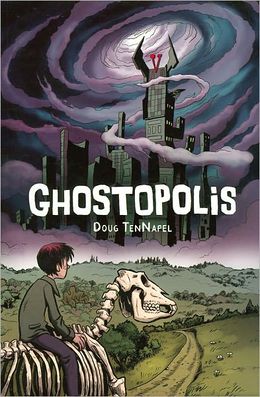 In the first few pages we meet Garth Hale, a boy of 10 or 11 with an incurable, life-threatening disease; and Frank Gallows, a washed-up ghost-hunter.  What could these two possibly have in common?

Frank works for the Supernatural Immigration Task Force, an agency that sends pesky specters back to the afterlife where they belong.  Gallows used to like his job, and he was good at it, but sadness and disillusion have had their way with him–due mostly to his doomed relationship with the beautiful Claire Voyant.  As a result, he’s grown a little careless.  While Frank is on the job in Garth’s neighborhood, a mishap with a spectral horse sends the boy to the afterlife prematurely.

There, Garth meets his own grandfather and begins (unbeknownst to them both) to repair some broken family fences.  Meanwhile Frank, in big trouble with the boss, seeks help from Claire to get to the afterlife and bring the boy back.  She can do it because she’s a ghost (who Frank somehow didn’t get around to deporting).  Frank, Claire, Garth and Grandpa Cletus all end up in Ghostopolis, where the overambitious Vaugner is consolidating the seven kingdoms of the Underworld (Mummies, Whisps, Goblins, Specters, etc.) under one rule—his.  Vaugner has satanic ambitions reminiscent of Paradise Lost, but his power is not as extensive as he thinks.  It’s certainly enough, though, to raise monumental Cain and bring the conflict to a (literally) towering conclusion.

TenNapel’s artwork is mind-blowing in places (like the battle between Garth and Vaugner for the very soul of the city).  The story itself serves up food for thought, such as where time goes in the afterlife and what is the nature of love.  (Claire’s Uncle Werewolf observes that “Love is in the acts, not the feels”).  And another thing: who is this mysterious “Joe” who may have built Ghostopolis in six days or a billion years?  “Most of us have never seen him.  We know him by the work he’s done.”  I’d like to know more about Joe (notice the close-up of his right hand), but he doesn’t play an active role in the plot.  Whether or not they dig the high concepts, kids will delight in the action and graphics, not to mention the delightfully creepy citizens of those seven kingdoms.

By the way, movie rights to Ghostopolis have been sold to Disney with Hugh Jackman as a producer (and he would make a great Frank Gallows, if anybody wants my advice).  The project is “in development.” 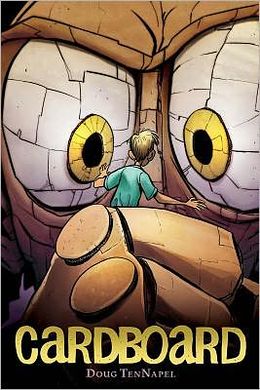 Mike, a hardworking carpenter, has endured a string of misfortune.  First his wife died.  Then his work dried up and no other jobs have come knocking.  Now it’s his only son’s birthday and all Mike can spare for a present is 78 cents.  Turns out that’s exactly what the walleyed cheap-toy seller Mr. Gideon wants for his cardboard box.  But it’s empty!  “Empty?” echoes Gideon.  “It’s full of ideas, projects . . . adventure!”

Better than nothing, Mike decides, so he buys the box and takes it home and cringes as Cam, his son, bravely hides his disappointment.  Father and son try to get excited over what they can make together, but the excitement grows for real when their joint project, a life-size boxer, comes to life!  Or does he?  Is a walking, talking paper man a person in his own right?

“There must be something besides just cardboard at work in me.  Whatever that thing is that is not just cardboard is part of what makes me ‘me.’  If there is a me that exists beyond just the materials I’m made of, then are we really a slave to the materials?”

The plot thickens when Marcus, the obnoxious kid next door, wants that creative power for himself.  Marcus has big plans, but he doesn’t think them through, and within a short time the situation gets very much out of hand.

The artwork reminds me of that sharp, slightly frantic style of “Spy vs. Spy” (remember Mad magazine?) which complements the mayhem.  But there’s a lot going on besides mayhem: despair, retribution, disappointment, hope, and good questions.  Such as, when do we take responsibility for our own mistakes (and stop blaming circumstances)?  When does grieving become cowardice?  Can a person really change?  And the big one: what make us, us?  The last plot twist could spark quite a little philosophical discussion with your fifth- or sixth-grader.

Kingstone Comics is making inroads in the arena of Christian graphics: see our general review (with thoughts on Tintin) here, plus our intern review of two graphic novels by Marvin Olasky, and podcast interview with Kingstone publisher Art Ayris.  Here’s  Emily’s interview with Avengers artist (and Christian) Sergio Cariello, and her thoughts on why guys like comics (with further links).  Finally, two to avoid: Drama and The Brick Bible.