*Harriet Tubman: Conductor on the Underground Railroad by Ann Petry

A well-written, engaging middle grades biography of Harriet Tubman, conductor on the Underground Railroad, that tells young readers about her life from birth to death. 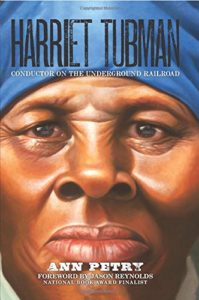 Recommended For: Middle grades, ages 8-12, and up!

She had always had the makings of a legend in her: the prodigious strength, the fearlessness, the religious ardor, the visions she had in which she experienced moments of prescience.

Harriet Tubman, aka Araminta, Minta, Minty, and, finally, Moses, looms large on the landscape of our country’s turbulent 19th century. Born to slaves on a Maryland plantation, she learned the meaning of hardship and hard work from birth. And she practiced running away at an early age, too, ending up in a pigpen much like the Prodigal Son. Eschewing the easier household work most young African American female slaves ended up doing, Harriet preferred the backbreaking outdoor work–and demonstrated prodigious strength early on. She condescended to make a pretty patchwork quilt for her marriage to her freeborn husband despite her impatience with indoor work, but John Tubman declined to follow his wife to freedom when she finally broke away.

The rest of Harriet’s life, as they say, is history: after her successful escape on the Underground Railroad, Harriet returned multiple times to rescue her family members and others from slavery. Her danger only increased as tensions mounted in the fragile Union until the reward for her capture was $60,000. Harriet eventually worked with the Union Army and ended her eventful life as a storyteller at the end of an era.

Petry’s biography of Tubman takes some liberties; today’s nonfiction–even for children–demands more source notations for quotations and other less verifiable facts than Petry gives. Nonetheless, this is a wonderfully written biography of an important figure in our country’s history. Petry includes countless thought-provoking statements about the nature of freedom, the culture of slavery and African Americans, and even the responsibilities of people to bring about social justice. It’s easy for biographies of figures like Harriet to slip into hagiography, but Petry keeps her tone level, shows the reader Harriet’s strengths and weaknesses, and places Harriet firmly in a historical setting without which Harriet’s own dream for freedom could never have been realized. From the white Quakers to the other escaped- and freeborn African Americans, Harriet benefited from others in much the way she later helped people.

Each chapter ends with a short historical note, filling in the gaps on other key players during the same time period: Frederick Douglass, John Brown/Harper’s Ferry, Supreme Court decisions, and more. Petry doesn’t avoid the hardships of slavery, but neither does she dwell graphically on any one instance. Thus, this is a great introduction to young readers of the horrors of slavery without going into too much detail. Notably, Harriet wasn’t born in the deep South–slaves had an even harder time there.

Cautions: violence (some of the treatment Harriet endured, particularly as a child)

This is a great book to discuss! Consider the following:

Have you read another Harriet Tubman biography you’d recommend?