The Vanishing American Adult: Our Coming-of-Age Crisis and How to Rebuild a Culture of Self-Reliance by Ben Sasse.  St. Martins Press, 2017, 306 pages, including index and bibliography.

Recommended for: ages 18-up 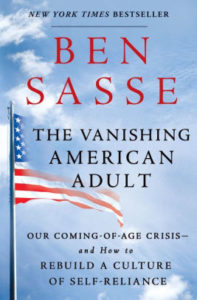 When the author accepted the position of President of a small Midwestern Christian college (and became the youngest college president in the nation), he noticed something about the students that disturbed him.  He was only one generation removed from these kids, yet a world away in attitude.  They were bright and well-behaved, almost all of them from intact Christian homes.  What they lacked was initiative. For example: early in December, a group of sorority girls were tasked with setting up and decorating the 20-foot Christmas tree in the lobby of the gym.  As they were leaving after finishing the job, one of the university officials happened by and noticed that only half the tree was decorated.  Why didn’t they finish the upper half?  The girls replied that they couldn’t reach any further.  Did anyone look for a ladder?  Nope—nobody even thought about that possibility.

We’ve all heard of university students who demand safe spaces, new hires who can’t take correction, and college grads who won’t consider moving away from their hometown to take a job offer.  Encouraged by his own parents to pursue new experiences, Senator Sasse and his wife seek to instill those same values in their homeschooled children.  But our culture in general is in trouble.  Somehow we’ve bought into the notion that “schooling” equals education, that delaying adulthood is desirable, and that kids must not be allowed to fail.  This new standard is sapping the energy that made America great.

The book is not just a gripe fest: he has a solution, and homeschooling parents are in an ideal situation to implement it.  Especially his first step: 1) “Flee Age Segregation.”  Seek out friendships with people of all ages and encourage your kids to ask questions.  2) Teach your kids not to fear hard work, but go out of your way to find work experiences for them.  (In interviews, Sasse frequently mentions sending his 14-year-old daughter to work on a cattle ranch one summer.)  3) Set an example of consuming less, and producing more.  4) Travel—as a family, and as individuals.  Include your children in the family trip planning and encourage them, as teens and young adults, to travel on their own.  5) Collaborate with your kids on building a home library: choose essential books in essential categories and make sure they get read.

Though Sen. Sasse is a politician, none of this is a matter of policy.  We’ve relied far too much on government to solve our problems and provide for our needs, but that was never the American ideal.  It’s not too late to recover that ideal, but if we don’t the consequences will be severe.  The Vanishing American Adult is sometimes repetitious and preachy, but it’s an important book with a timely message.