*Abigail Adams: Witness to a Revolution by Natalie S. Bober

Starred review for this young adult biography that showcases a thoughtful–and thought-provoking–Abigail Adams against the backdrop of tumultuous American history. 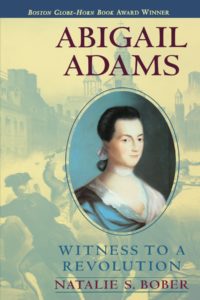 Recommended For: Ages 10 and up

My dearest friend, as you have been called in Providence into the chair of government, you did not accept it without knowing that it had its torments, its trials, its dangers and perplexities. Look steadfastly at them, arm yourself with patience and forbearance and be not dismayed, and may God and the people support you. Having put your hand to the plow, you must not look back.

So wrote Abigail Adams, her husband’s biggest champion as well as his friend, lover, and helpmeet. Two centuries later, we know her intimately because she and John filled their frequent absences from one another with letters–and they saved the letters. What a wealth we now have! Abigail’s life was no less tumultuous than that of America itself as both rose to independence and adulthood at the same time. Her courtship to John sets the tone for the rest of their lives: mutual admiration, strong affection, and a longing to be with one another that so often went unfulfilled. After marrying John, Abigail soon found herself pregnant and alone as John raced off to serve his duty to his country. Smallpox inoculations, the trials of slow and absent mail, the needs of extended family alongside a growing young family of their own, and the myriad events swirling around Boston in the second half of the 18th century make for an eventful life.

What makes this biography shine are Abigail’s frequent reflections on the nature of marriage, the joint duty of husband and wife as they serve where God has placed them, the role of a parent (particularly a mother), and the civic duty all are called to. Our own times know nothing of the sacrifices our founding fathers (and mothers) paid as they worked to aid a young nation. Would that today’s politicians loved and served their country in the same manner! Abigail and John’s letters are used liberally throughout the text, creating thorough portraits of this remarkable couple. Readers may find the text hard to follow if they are not already familiar with the basic timeline of the American Revolution; otherwise, teens and their parents should find much to ponder and enjoy in this thought-provoking read. This is a biography to read slowly and savor, not one that makes for a “fast read.”

*Indicates a starred review, a “best of the best”