Every Day by David Levithan

The movie version of Every Day, based on David Levithan’s YA novel of the same title, opens today.  Here’s our review from 2012 that addresses some of the interesting questions raised by the book. 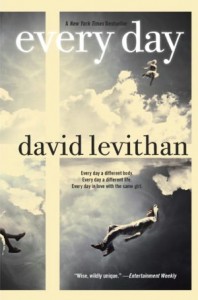 “We all contain mysteries, especially when seen from the inside.”  Very true, but “A” contains more mysteries than most, because of the curious destiny of residing in a different body every single day.  It’s like speed-dating reincarnation, except that death is optional.  We first encounter A in the body of a dude named Justin, on day 5994: “I wake up.  I immediately have to figure out who I am . . .”  Guiding Justin through the routine by accessing his memories, A meets Justin’s girlfriend Rhiannon, and for the next forty days nothing is the same, because A falls in love.  “I fell in love once, or at least before today I thought I had.  His name was Brennan . . .”  You see the difficulties.  Love changes things even for us singular beings, but this hapless 16-year-old wreaks greater-or-lesser havoc on forty different identities while trying to see Rhiannon, meet her, talk to her, and work out some kind of future with her.

Before long Rhiannon has to be told what’s going on, and she’s amazingly receptive.  But it’s hard for her to relate to some of A’s manifestations—as a 300-pound loner, as a pious Bible thumper, as an over-sheltered homeschooler, as a girl, as a lesbian, as a transvestite—and for one memorable day, as Rhiannon herself.  Further complications develop, including a genuine villain who could be the devil.  All this might have been played for laughs, but Levithan doesn’t, and in the process of exploration he uncovers some intriguing questions about self and identity—questions that don’t get a satisfactory answer.

What is identity?  Where does it come from?  How can A develop a distinct personality while sojourning in so many bodies and contexts?  For it is a distinct personality: kind, decent–even wise, though much of the wisdom is “enlightened” contemporary ambivalence.  For example, “I feel the universe is telling me something [when I choose to remember Rhiannon].  And it doesn’t even matter if it’s true or not.  What matters is that I feel it, and believe it.”  A’s moral sense is so keen it forbids sleeping with Rhiannon, in one of his male manifestations, because that would mean stealing someone else’s “first time.”  Strange as it sounds, this is a moral choice.  But on what basis does he decide right and wrong?  Walking a mile in someone else’s shoes can certainly help one’s perception but that’s assuming one has a self to come back to.  A doesn’t; A will not even lay claim to male or female, having equal experience with each (gender fluidity in the extreme).

Love matters above all: “I’ve never fallen in love with a gender.  I have fallen for individuals.”  But it’s impossible for Rhiannon to perceive him as anything but male, and we can’t either.  Love is not abstract, as A seems to recognize in another context: “I want love to conquer all.  But love can’t conquer anything.  It can’t do anything on its own.  It relies on us to do the conquering on its behalf.”

Every Day is one of the most honored and buzzed-about novels of the year—already on several “best of” lists  and sure to be singled out by the American Library Association.  It’s fascinating, thought-provoking, sympathetic, and reasonably fair-minded, with no bad language or graphic scenes.  It’s also deeply deceptive, for reasons suggested above: identity must be grounded.  Morality must have a source.  Too many people today think that they can construct their own reality, at least to a point.  One of A’s favorite hosts is Vic: “Biologically female, gendered male.  Living within the definition of his own truth, just like me.  He knows who he wants to be.  Most people our age don’t have to do that.  They stay within the realm of the easy.”  But on the other hand, “I am learning that a life isn’t real unless someone else knows its reality.  And I want my life to be real.”

Or not.  Who says?  As frustrating as it can be, I think mature Christian teens could read this novel with some profit, as long as they maintain a skeptical distance.  But hold close verses like Col. 3:3, Gal. 2:20, Gal. 4:9, and I John 3:2: “We are God’s children now, and what we will be has not yet appeared; but we know that when he appears we shall be like him, because we shall see him as he is.”

From time to time we review “Discussion Starters”: YA novels that reflect a particular facet of a non-Christian worldview: see Revolver, Where Things Come Back, and The Fault in Our Stars.