The Hate U Give by Angie Thomas

The Hate U Give, one of this year’s most acclaimed YA novels, offers a well-rounded, realistic picture of challenges faced by the black community (see cautions). Ages 18-up 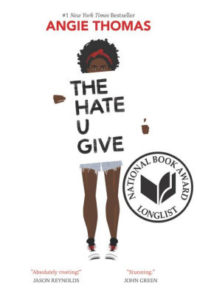 Recommended for: ages 18-up

Starr Carter lives between words: though she and her two brothers attend a private school in the ‘burbs, they live in the ‘hood.  Though she has white friends, and even a perfect white boyfriend, her black friends don’t get it.  Though her parents are married, her mom a nurse and her dad a business owner, Daddy is known to the cops as an ex-con.  Also indiscretions in his past resulted in Starr’s older half-brother Seven.  So there’s baggage in Starr’s family, but when a cop pulls over the car she’s riding in with her friend Khalil, the baggage almost crushes her. The situation quickly gets out of hand and Khalil ends up bleeding to death by the side of the road—another unarmed black teen dead for no reason.  That happens on page 23.  Pages 24-444 work out the consequences.

White people can say that the stats need to be sifted carefully, that race relations have come a long way, that the black community has internal problems to work out.  All that is true, but white people don’t have to live it.  The Hate U Give (title taken from a Tupac rap song) acknowledges the internal issues–broken families, absent fathers, crime-ridden neighborhoods– but is also explicit about the difficulties.  You don’t have to accept Starr’s father’s conviction that the system is rigged against them to feel the sense of helplessness. Helplessness sits heavily on Starr, in spite of her advantages, until she finds a voice and raises it in protest.  The system may not be fixable but people are, and THUG clearly shows the value of family and faith.  The author, a professing Christian, gives us memorable characters working out their own salvation with fear and trembling.

That said, some significant cautions: the book could be shorter.  More seriously, language is a big concern: plenty of f-bombs, s-words, and some profanity may override the value for some parents.  More seriously still: though Starr prays, and her family prays together, it’s to someone they call “black Jesus.”  I’d like to say I understand this but I don’t.  Jesus is neither black nor white, but the only way black and white in this country can come together and lay down our tortured history is at the cross of the one Jesus.

Cautions: Language, sensuality (one make-out session with the boyfriend)