The Disappearances by Emily Bain Murphy

A town where qualities disappear every seven years is the setting for The Disappearances, a clean, thought-provoking teen mystery. 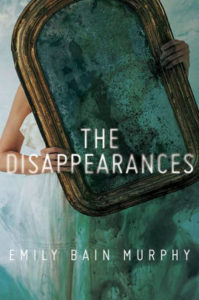 Aila Quinn knows only one thing about Sterling: it’s her mother’s home town.  And it’s her new residence, even though she’s never been there, even for a visit.  Since Mother’s untimely death from cancer, and Father’s induction into military service post-Pearl Harbor, the only family willing and able to to take in Aila and her 12-year-old brother Miles are the Cliftons. Mrs. Clifton was Julia’s Quinn’s closest friend, but Aila soon realizes that her mother didn’t have that many friends in Sterling.  In fact, some of the inhabitants seem downright hostile.  It doesn’t take long for the Quinns to notice other odd circumstances:  Why are there no mirrors in the Clifton house?  And why do flowers have no scent?  The truth is strange and inexplicable: every seven years in Sterling, something disappears from the town.  Not a material object, but a quality of the sort we usually take for granted.

Once a common human ability disappears, the town scientists go to work finding a “variant” that will counteract the effect, if temporarily.  At least one character catches on to the implications: “If people will pay money for a temporary improvement to the physical world–even something as fleeting and insignificant as a scent–how much would they pay for something that goes infinitely deeper than that?”  What if virtues like courage and determination could be captured and sold?

The Disappearances poses an intriguing concept that raises interesting questions and ideas.  What do we have that we don’t appreciate?  The resolution is not entirely satisfactory, as if the author is intrigued by the concept but can’t quite explain it.  Also, though the story takes place in 1942, with the US on full war footing, the War only gets an occasional mention and there’s not much of a period sense in manners and slang.  But the language and content is clean, the characters are appealing, and the story should help readers appreciate the everyday blessings of life on earth.