Refugee weaves the stories of three children fleeing intolerable situations in their home countries, from 1939 to the present. 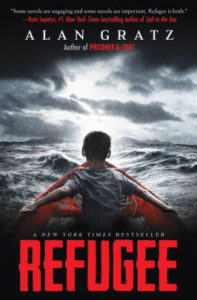 Berlin, 1939: Josef Landau’s father continued to give legal advice after he was forbidden, as a Jew, to do so.  The consequence for him was six months in a concentration camp.  Once he’s released, the family is allowed to leave Germany on the St. Louis, a ship bound for Cuba.  But will Cuba take them in?

Havana, 1993.  Now that the Soviet Union has fallen apart, there’s no one to prop up the government of Cuba.  Food shortages have provoked riots.  Castro has temporarily suspended the travel embargo and Cubans are free to leave, but Isabel Fernandez’ father has crossed swords too many times with the government, and if he’s caught escaping, it’s a life sentence for him.  The family must sneak out in a homemade raft.  It’s only 90 miles, but will they make it?

Aleppo, 2015.  Mahmoud Bishara enjoyed a happy and comfortable life with his well-to-do family until his country convulsed in a brutal civil war.  When their apartment building is bombed, and the family barely escapes with their lives, Mahmoud’s father decides they can’t stay a minute longer.  Germany is taking refugees.  If only they can get there . . .

Each of these children, with their families, begin a journey fraught with anxiety, tension, cruelty, kindness, frustration, peril–and loss.  The author pulls no punches.  Though the violence is not graphic, some gut-wrenching scenes will disturb sensitive readers.  Some of us could stand to be a little disturbed, and these stories put a human face on an issue that frequently blares out of the news programs we watch–or barely heed.  It makes the refugee crisis visible, and as Mahmoud realizes,

The author deserves credit for gripping action and for tying the three stories together masterfully. One warning, though: Refugees presents only one side of the issue, in a highly-charged, emotional way that will blunt reasonable concerns.  Hungary, for example, comes across as an adversary in Mahmoud’s story.  But when the Prime Minister of Hungary explains his reasons for closing the borders, they make sense.  We don’t hear those reasons in Refugee.  Also, though many refugees are like Mahmoud’s family, some–perhaps the majority–are rootless young men who have wreaked havoc in their hose countries.  Refugee is worth reading along with your children, while researching the downside of unlimited mass migration.

For other books on this theme, see our reviews of Salt to the Sea, Shooting Kabul, Escaping the Tiger, and 90 Miles to Havana.