The third volume of this series about teenage reporter Lois Lane maintains the action level and ups the emotional ante. 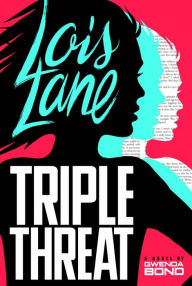 Lois Lane, intrepid reporter of Fallout, is back with a new adventure in high-school journalism and big-city chicanery.  As our story opens, Lois is hanging out with her friends and looking for the next big story.  Some ominous developments are in the works, such as the escape of mad-scientist type Dabney Donovan, who was likely to resurface with further schemes in mind—if not simple revenge.  Then there was the needling presence of TheInventor, proprietor of a website dealing with supernatural phenomena.  That’s where she met “Smallville Guy,” a funny, smart, just-her-age fellow with supernatural appeal.  She hopes to meet him in person soon, but in the meantime it appears another supernatural guy is trailing her—or actually three teens who may just be excessively fast and powerful.  But Lois’ reporter instincts are immediately on alert.

Lois is the same plucky heroine we met in Vol. 1 of her adventures—sometimes brash and hasty, but dedicated to capturing the story and doing the right thing.  Fans of the series will be delighted that she finally meets Smallville Guy—in person!—and he doesn’t disappoint.  It’s also time to share his real name: Clark Kent.  Their attraction is mutual and intense, working up to an actual (chaste, sweet) kiss.  But he still has a secret.  As is often the case with series books, plot lines pile up and sometimes crowd the main storyline, but teens will find this a fast, enjoyable read.