Till We Have Faces: a Redeemed Reader Discussion

Before you read Till We Have Faces, you must first know the myth. You can either read a picture book version or the one by Apuleius that Lewis helpfully provides at the end of his book. 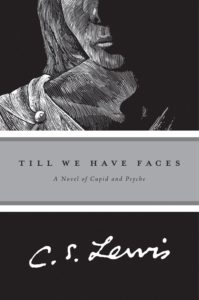 Till We Have Faces is the myth of Cupid and Psyche told from the perspective of Orual, one of Psyche’s jealous older sisters, and of her bitter wrestling with the gods who stole Psyche away from her. What makes her so jealous? What kind of professed “love” would cause her to seek Psyche’s ruin and bring her such unhappiness? The Redeemed Reader staff had another virtual discussion about this favorite C. S. Lewis book! Read on to see what we think about this literary masterpiece that overlaps with the themes of Beauty and the Beast.

In Lewis’s wonderful Chronicles of Narnia, he demonstrates coming to Christ as a little child. Till We Have Faces begins with a bitter old woman accusing the gods of injustice. How does her conversion reflect the Christian experience?

Alysha: For me, her conversation reflects the Christian experience in that we all have times where we rely on ourselves instead of on Christ. We feel betrayed that life did not happen in the way we wanted. We are selfish creatures who parade our wounds to the world as a sign of injustice. Only through Christ’s redeeming love can we look outside ourselves and begin to realize that it is through the giving away of ourselves that True peace will be found. We will carry scars from this world, but our Hope is in the healing nature of our Savior.

Megan: During my senior year I produced it on stage at Covenant College. We had cast t-shirts made that were black like Ungit, the shapeless stone goddess worshipped in Glome. The t-shirt had the head of a lovely Grecian woman and the words “You also shall be Psyche.” That, to me, represents the redemption of a sinner whose heart is hard and black, but is promised transformation into the beloved bride of the god. It is a mercy that we are invited as children, but not rejected in our old age.

A year or so later I introduced my then future husband to TWHF. In return he shared with me a song Phil Keaggy wrote, using a poem Lewis composed long before the ideas became the brilliant, little known Till We Have Faces. Here are the words:

All this is flashy rhetoric about loving you.
I never had a selfless thought since I was born.
I am mercenary and self-seeking through and through:
I want God, you, all friends, merely to serve my turn.

Peace, re-assurance, pleasure, are the goals I seek,
I cannot crawl one inch outside my proper skin:
I talk of love –a scholar’s parrot may talk Greek–
But, self-imprisoned, always end where I begin.

Only that now you have taught me (but how late) my lack.
I see the chasm. And everything you are was making
My heart into a bridge by which I might get back
From exile, and grow man. And now the bridge is breaking.

For this I bless you as the ruin falls. The pains
You give me are more precious than all other gains.

It seems that Lewis can truly relate to Orual’s struggle in coming to know God, not merely know of Him.

Why do you think this extraordinary novel is so little known compared to his other fiction?

Betsy: There’s a large percentage of C. S. Lewis fans that come to his works through Narnia as children. Most of the remaining fans come to his work as an adult seeking to read his theological/philosophical works. Till We Have Faces (and the Space Trilogy, to a lesser extent) falls right in the middle. It’s also more complex than either his Narnia series or many of his theological/philosophical works in the sense that it demands much of the reader: we must bring all our academic and intellectual faculties to mind and our imaginations. The Great Divorce and The Screwtape Letters approach this level, but they are a bit more straightforward as an allegory.

Janie: I actually came to know C. S. Lewis through Mere Christianity, around the age of 19—didn’t get to the Narnia Books until I was in my twenties.  I may have even read the Space Trilogy first, or around the same time as I encountered Narnia.  Till We Have Faces is very different, and, as Betsy says, it falls through the cracks: not a series, not an academic or theological work.  I read somewhere that Lewis considered it to be his finest work of fiction, and I would agree with that: it’s tight, spare, and controlled, not discursive like the Space Trilogy or derivative like Narnia (Tolkien, it’s said, didn’t care for  Narnia at all for that reason).  It may be a bit forbidding to some people, though it’s the shortest of his novels.

Alysha: I echo Betsy, and I would like to add that this is also a work of fiction that invites the reader to follow an unlikable protagonist, one who is angry, selfish, and at times cruel. It is a beautiful story, but an uncomfortable one as it brings readers face to face with their own sin and their deep need for redemption.

Megan: It took me a while to fall in love with it. I first read it when I was 14, looking for more of the familiar author I knew, and didn’t understand it. Some time later, I don’t know why, I read it again and loved it. It became part of a trilogy of favorite books that are about women struggling to know God. (Two of the others I love are The Hiding Place and Stepping Heavenward.)

How does this book demonstrate Lewis’s theology? Why do you think he used this story and setting?

Janie: I would have to be better versed in “Lewisiana” to answer this question intelligently!  But he was, after all, a classicist with a love of ancient literature and mythology.  His first great literary crush was on Norse legends like Siegfried.  The Kingdom of Glome has a Nordic whiff about it: warlike, spare, and uncompromising.  But it’s supposed to be a barbarian kingdom on the frontier of hellenistic culture, slowly rising out of the old earth-mother religion.  It might in some ways represent Lewis’s own journey from the basic, instinctive, earth-motherish influences of childhood up through the cool rationality of his education to the full light of faith which melds instinct to intellect.

Megan: I haven’t read as much of Lewis as I wish I had either, but I think the theophany when Orual actually sees the palace Psyche spoke of demonstrates the truth that all of humanity is without excuse. We cannot deny or reason away the conviction that God is more real than what we can see. I think TWHF may also exemplify his book The Four Loves: storge (empathy), philia (friendship), eros (sexual—another name for Psyche’s husband), and agape (divine). I haven’t read The Four Loves so I cannot yet comment on this further—perhaps some of our readers could?

Some years ago I [Megan] hosted a literary weekend, and one of the young ladies attending pointed out that King Trom played the part of “law” in Orual’s life. What are your thoughts on that?

Janie: That was my impression, too.  I think of the mirror, and how he used it—in a cruel, taunting way–to show Orual her ugliness.  But we should be clear that that kind of cruelty is a misuse of the law.  God intends for it to show us how we fall short and to show us how we should live—that’s how James uses the metaphor of a mirror in James 1:22.  But if we insist on living by the law, or expecting others to live up to our standards, it can only be a burden and a reproach.

Megan: In fact, Paul speaks of the law as our tutor to bring us to Christ. Orual’s tutor, the Grecian slave known as Fox, taught her to reason and doubt the gods. And yet she believed in them, and he later admitted that he was wrong.

Finally, how did you discover Till We Have Faces, and why do you personally love it?

Betsy: I discovered it through my good friend’s raving about it and her determination to set it into a play for her senior thesis in college :-).

Janie: I don’t remember if I read a university copy first or picked it up in a book store.  In my mid-twenties I was reading anything by Lewis I could get my hands on!  I think Lewis creates his most convincing character in Orual—certainly his most convincing female character.  She made me furious, and yet I could understand and sympathize with her.  Such depths of unhappiness!  And yet I could see how she brought much unhappiness down on herself.  That portrait might have helped warn me against the same sort of self-pity and resentment—or at least recognize it when I saw it.  And also, there are some scenes in the story that are absolutely indelible: when she sees Psyche’s palace in the fog, and then convinces herself she didn’t . . . How often do those foglike doubts swirl in our minds and we have to call ourselves back to trusting faith?

Alysha: I discovered this book as a freshman at college. I happened upon it in the school book shop and wanted to see what all the fuss was about. I was not disappointed. The story quickly became a favorite of mine, and I love it because it blends mythology, Christianity, and pure academia into one beautiful package.

Megan: I saw a friend reading it and wanted to be as bookish as she was. I’ve never caught up with the extent of her reading, but many years later she became my sister-in-law!

Have you read Till We Have Faces? What did you think? How did you discover it? Do you agree with our assessment of it?