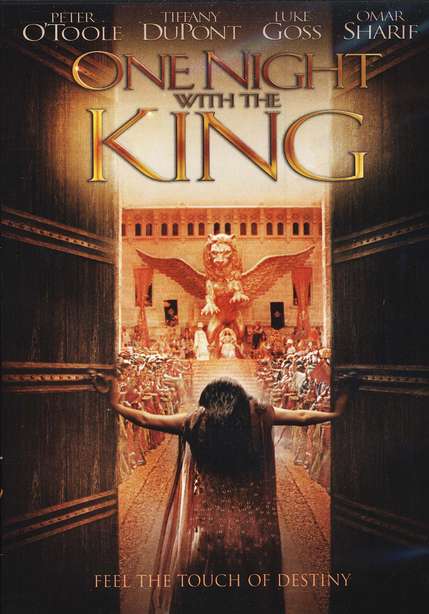 The Bible has always provided material for the big screen, with the 1950s and early 60s being the golden age, perhaps of scripture cinema.  I remember one Esther movie from that time (though not very well) and a souped-up version of Ruth, and Gregory Peck as King David casting his eye on Bathsheba.  Then there was Victor Mature as Samson, Charlton Heston as Moses, and several versions of the life of Jesus.  One Night with the King (released in 2006), a re-telling of the Esther story, is in some ways a throwback to that sumptuous era, and in other ways something different.

The story is slightly embellished: young Hadassah barely remembers the day her parents were 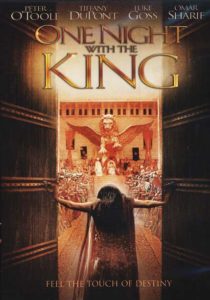 murdered by . . . agents of the king, maybe?  Persons and motivations aren’t clear but perhaps that’s because the girl never understood why.  At any rate, her cousin Mordecai is taking good care of her and young Jesse ben-Obed has his eye on her.  But meanwhile, back at the palace, King Xerxes is planning a military campaign to avenge his father’s catastrophic failure to subjugate the Greeks, and Queen Vashi doesn’t like it.  That’s why she stages a protest during the grand banquet given to drum up support for the campaign, and he must banish her for humiliating him.  Loyal Prince Memucan doesn’t favor the military campaign but treacherous Prince Admatha does, because he plans to use the King’s absence to usurp the throne.  The ambitious courtier Haman is Admatha’s ally, but Haman knows how to play both sides.  So there’s a lot of intrigue already when the king begins looking for a new Queen, and some of it is a bit hard to follow.

The problematic elements of the story are handled tastefully.  What to make, for instance, of the clear biblical inference that Esther has joined the king’s harem and the “One Night” was for sleeping with him?  The movie uses Esther’s big night as an opportunity for them to get acquainted.  The king is worried about his upcoming military campaign and isn’t thinking about romance, but the girl charms him.  They don’t advance to kissing until he marries her and makes her his queen. Then, to add tension to their relationship and undergird her fear of going to him unsolicited, the script stirs misunderstanding and jealousy into their relationship, elements that would be more typical of a modern-day couple than a fourth-century B.C. oriental despot and his consort.  There’s also some talk about Greek democracy and Jewish egalitarianism, which isn’t true to the time period and adds nothing to the plot, except to make the story seem more relevant.

Otherwise One Night follows the biblical narrative.  Some viewers may wonder about the prologue, which tells Haman’s backstory and the origin of his hatred for the Jews (in which Peter O’Toole appears for less than a minute as the prophet Samuel—not enough screen time for him to grow a beard), but that’s essentially true as well. Still, the movie resembles an Arabian-nights legend more than a historical epic—dreamlike, pensive, and romantic (in the literary sense, not the love-story sense).  This isn’t necessarily a bad thing.  The production values are surprisingly high: gorgeous costumes and sets, striking cinematography, dramatic score, strong performances.  One Night with the King, though it may be a little too long for younger kids, is wholesome family entertainment and possible food for thought.  And be sure to see Hayley’s  devotional on Esther and her relationship to Belle in Beauty and the Beast!