The Queen of Attolia: A Beauty and the Beast Discussion 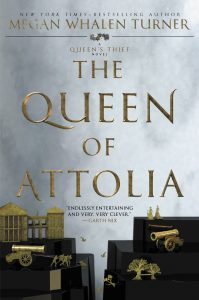 As part of our Beauty and the Beast Adventure, Megan, Betsy, and Hayley are discussing The Queen of Attolia by Megan Whalen Turner.

Redeemed Reader’s Megan reviewed the first book in the series, The Thief, last year, and it was part of Redeemed Reader’s Winter Book Fair.  The Queen of Attolia is its sequel and continues the series.  Keep reading to see why, but be careful if you haven’t read The Thief and want to avoid spoilers!

Hayley: Let’s get started!  When did you first read The Queen of Attolia?  Did you enjoy it right away?

Betsy: I read it several years ago. Loved it immediately and called Megan to tell her she “MUST READ THIS BOOK.” I actually enjoyed King of Attolia even more. I just reread Queen of Attolia and liked it even better on a reread.

Megan: Betsy called me and said “You’ve GOT to read this book! It’s like a cross between Pride and Prejudice and Till We Have Faces.” I thought “No way, it can’t possibly be that good.” But Betsy was so right (as usual)! The best part is that it is not tainted with scenes that violate my conscience as I read it.

Hayley: I read it last year because I kept hearing it praised by Megan and Betsy!  I really enjoyed it the first time, but I think I’ll appreciate it more when I reread it.

A Favorite —but Why?

Betsy: This book reminded me of some of my other favorites (such as Pride and Prejudice) because of the character dynamics. Megan Whalen Turner really develops her characters well. They come alive and mature within the book. Turner also doesn’t overstate things. Her respect for the reader means that we, as readers, have to work a bit with her books to piece the plot together and we get to know the characters as the book unfolds just like we do with real people. This makes for a thoroughly enjoyable reading experience!

Hayley:  I’ve always loved fantasy and Greek mythology. (As well as Pride and Prejudice!  I wouldn’t have thought of that comparison, Betsy, but I can see it now!)  Turner makes Gen’s world come alive. It is a world that is gritty and hard yet there is hope. Sometimes a world is alive and gritty, but it’s depressing.  Turner could go there, but she doesn’t and instead has a very life-like alternative reality complete with faith and religion.  Her characters are very real, with strengths, weaknesses, and flaws.  Yet instead of being irritating, their inadequacy makes them relatable and lifelike.

Megan:  Although she is sometimes a little too subtle by half, Turner’s world reminds me a little of Tolkien because the seams are bursting with things the characters know but the reader doesn’t. Is she ever going to satisfy our curiosity? Will we ever say “Oh, THAT’s what she meant!” There is still more to notice upon successive readings. As I said before, thus far the books are clean and I don’t have qualms about recommending them.

Hayley: Just for fun: who is your favorite minor character?  I love the professor, I need to look up his name. Maybe he’s not a professor, but he ends up kidnapped by Gen.  I also think that Median ambassador is a perfect evil underling —kind of like a Calormen from Lewis’ Horse and His Boy.

Betsy: He’s the Mage of Sounis (a neighboring kingdom). And yes! the Median ambassador is totally like a Calormen!  Nice allusion there.  I really love Eddis, the Queen of Eddis (she’s usually referred to as “Eddis”) as well as Gen’s father. Both of those characters show such patience with Gen and yet, they both urge him to get back in the game, as it were. They are willing to offer Gen encouragement and modifications, but they are not willing to settle for him giving up on life or his calling. That is a great model to emulate when people in our lives are undergoing tremendous suffering: patience and not giving up. It’s hard to find that tough love balance.

Hayley:  Thank you, Betsy!  (Rather than replace my fumbling for the Mage’s name, I’m going to leave it for readers, to show what our conversations look like —and to show Betsy’s prowess with names!)  I was thinking, as I drove home from work yesterday, that Eddis really is another of my favorite characters.

The Queen Who Needs Redemption

Hayley:  As we prepared for this discussion, its tagline on our calendar was “The Queen who needs redemption.”  I’d love to go into this, without giving something away!  What themes in this book are similar to Beauty and the Beast?

Answering my own question —In Queen of Attolia, the Queen takes the place of the Beast.  Outwardly beautiful yet cruel within, she is trapped by circumstances and cannot redeem herself.  She needs redemption, but the question remains, is she too far gone to be redeemed?

Betsy: Interesting angle, Hayley. I think we can make an argument for both Gen AND the Queen being beasts: Gen is a beast outwardly—a “curse” that the reader finds out was necessary for him to learn humility and for the desire of his heart to actually materialize. The Queen is beastly internally even while she is stunning outwardly. Both Gen and the Queen need redemption of a different sort: Gen to be restored to leadership and “manliness” (in a sense) and the Queen to be loved despite her proud, self-sufficient exterior. What do you think?

Megan: I love that the Queen is broken in numerous ways, but not hopeless. Everyone who knows her fears her, and she is certainly a dangerous woman, but this sets up such a unique and irresistible romance! (Does that give too much away?)

Hayley:  I don’t think so!  Like Till We Have Faces —which we’re discussing later this month— Queen of Attolia has a very Greek setting.  How would you describe its gods and the faith of Gen?

Megan:  I am fascinated by the mythology Turner creates. Her characters who believe in them tell stories of the gods that resemble Greek mythology, yet are so original.  In Till We Have Faces, Orual thought that the gods were cruel and capricious until she came to know them personally. Gen doesn’t seem to have genuine belief in the gods whose stories he knows until they take away something very precious to him. But as a thief, isn’t this something Gen did all the time? Still, if the gods had not deprived him of something he thought he could not live without, they could not have given him . . . well, you’ll have to read the book!

Betsy: The faith Gen has in his unseen gods, particularly the one, has always struck me as being a good picture of what our own faith should be. The pantheon of gods and goddess feels very Greek in the books, but Gen’s faith seems particularly genuine. He struggles valiantly to trust in the midst of despair and comes to the conclusion that his god is sovereign and that it’s for Gen’s own good. That resonates with me as a Christian more than the classical fatalism we often see in Greek literature.

Hayley: There’s a song by Andrew Peterson I love called The Silence of God.  For much of that book, Gen is living in that reality.  He knows the gods are real but must bear their silence.

How does The Queen of Attolia remind you of our world?

Hayley:  I think Turner creates a world that is very real and where tension, danger, and uncertainty are clear and present fears.  I was thinking today how our world, especially with the angle of recent events in the news, seems uncertain. I appreciate The Queen of Attolia because it isn’t set in a perfect world; it reminds me of our own.  And yet it has room for hope, and for sovereign providence.  What do you all think?

Betsy:  I think you nailed it, Hayley: it’s a hopeful faith in sovereign providence. Even though these are fictitious Greek gods and the practices seem much like those of the ancient Greeks, yet the faith exhibited in these books reminds me more of our own Christian faith. The ancient Greeks were more fatalistic than hopeful, and that is a tremendous difference from Christianity. I especially love the ending when Gen comes to realize that all things—ALL things—have been working together for his good and that of his people. Not to put too fine a point on it or make these books “Christian” when they make no claim to be, still this is one of the best literary portrayals of these Christian themes I’ve ever read.