Fans of mythology, fairy tales and lovely picture books will enjoy the Crafts’ Cupid and Psyche. 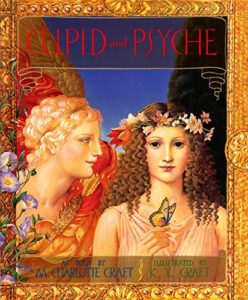 Several thousand years ago the ancient Greeks and Romans told an early version of Beauty and the Beast, the myth of Cupid and Psyche. In this story, the goddess Aphrodite/Venus grows jealous of a beautiful princess and sends her son Cupid to make Psyche fall in love with a hideous creature. Instead, Cupid falls in love with Psyche, and contrives to make her his wife.

Believing that she is cursed to marry a monster, Psyche is taken to a beautiful palace where she is served by invisible attendants. When the “creature” arrives, he is hidden in darkness. Although she enjoys his company, he will not allow her to see his face. After a time, she asks to have her sisters come for a visit so they will know she is well and happy. Her unseen host reluctantly agrees, but warns that they may bring her ruin if she tells them about him.

Her obedience only lasts until the end of their visit, when she confesses that she has not seen the master of the house. Fearful that Psyche is indeed being kept by a beast, they urge her to look at him when he is asleep. Psyche’s contentment gives way to mistrust. That night, when she visits her companion’s chamber in the night, she finds the god of love who wakens when a drop of hot oil spills from the lamp.

“Love cannot live without trust,” he says, and vanishes. The rest of the story is Psyche’s effort to win him back from his jealous mother.

The version retold and illustrated by the Crafts is well told and gorgeously illustrated. Richly detailed colors with light and dark hues reflect the drama of the story. This is a wonderful introduction to the themes found much later in Beauty and the Beast.

Although the Crafts also have a version of Beauty and the Beast, readers should be aware that some of the characters would benefit from less translucent attire. There are many other lovely choices of that fairy tale to choose from.

This is part of our Beauty and the Beast Adventure. For more titles that show similar themes (books and movies!), check the original post.