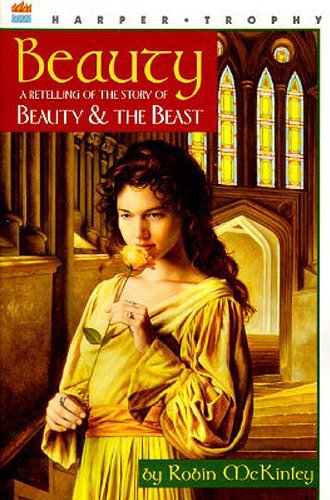 This is one of the retellings of Beauty and the Beast we are featuring as part of our Beauty and the Beast Adventure. We are exploring the great biblical themes of beauty, beast, love, and redemption as depicted in the traditional fairy tale. Redeemed Reader is not affiliated with or endorsing the new Disney live action movie.

McKinley skillfully weaves new and fresh elements into an old and beloved story.

Recommended For: Ages 12 and up

*The following review is adapted from Emily’s Lemonade & Literature Post*

Robin McKinley is a popular and award-winning fantasy author. Beauty: A Retelling of the Story of Beauty & the Beast was her first novel, published in 1978.

While following the classic storyline, McKinley adds some of her own details.  The result is beautifully engaging.  It is also surprising.  Beauty is plucky and and no-nonsense.  She’d rather be riding her horse, Greatheart, or reading, than dressing in fine clothes.

Not all of McKinley’s books are problem free*, but Beauty epitomizes the best of McKinley.  In the words of one writer, “McKinley’s females do not simper; they do not betray their own nature to win a man’s approval. But neither do they take love lightly or put their own desires before anything else. In McKinley’s books, the romance, like the adventure, is based upon ideals of faithfulness, duty, and honor.”

There’s something about the idea of the beautiful girl and the ugly beast that strikes a chord in our imaginations. Perhaps in a world too often distracted by appearances, this story in which appearances truly don’t matter gives us all a little hope.

* Years later, McKinley revisited Beauty, writing a second retelling of Beauty and the Beast, Rose Daughter.  Intended for an older audience, Rose Daughter is not the same caliber as Beauty and possesses some discordant themes.

1.  Names play an important role in the story. McKinley uses them to simultaneously pay homage to the original fairytale, and to provide her own twist on it. What significance does the name “Beauty” end up having in this version?

2.  This version of the story makes Beauty a voracious reader, much as the Disney film would do 13 years later. The story in Andrew Lang’s Blue Fairy Book also mentions that Beauty likes to read. Why might Beauty be presented as a book-loving heroine? What does this add to the story?

3.  Most versions of the story portray Beauty’s sisters as selfish, greedy, and unkind. McKinley takes an entirely different route. Why do you think she might have done this, and how does that choice affect the story?