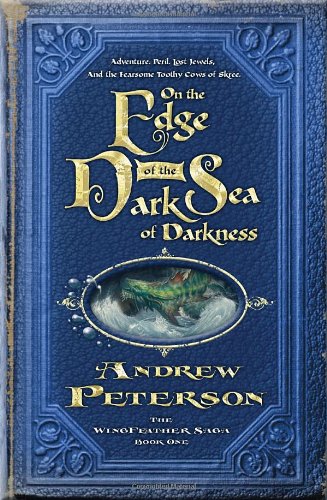 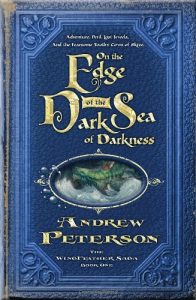 Recommended For: Ages 10 and up, especially lovers of epic fantasy (and intrepid 9-year-olds) 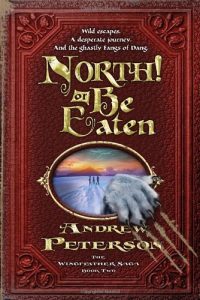 Summing up nearly 2000 pages in one review is difficult. When the 2000 pages is as full of adventure, near-death experiences, fantastical creatures (quill diggles, snickbuzzards, toothy cows), evil villains (the Fangs!), several historical epochs, and the Shining Jewels of Anniera, summing up is nigh impossible. Aeriwar is a richly developed fantasy world complete with its own history, creatures, and legends. As the series opens, Janner, Tink, and Leeli Igiby live with their mother and grandfather in Skree. Constantly in fear of the murderous Fangs and their boss, Gnag the Nameless, the Igibys try unsuccessfully to mind their own business. That would make for a boring story, however, and they are quickly thrust out of their boring lives and into a wild adventure. The three children find out secrets about their family history (particularly its connection with the fabled Shining Isle, Anniera), end up on the run from Gnag, travel much of the world of Aeriwar, and face peril at every step. Their trust in the Maker, aided by their mother’s own example, enables them to fulfill their callings, even though those callings often exact a terrible price. Humorous footnotes, particularly in the first couple of volumes, add to the liveliness and are not to be missed; the tone, however, grows richer and more somber as the books progress. 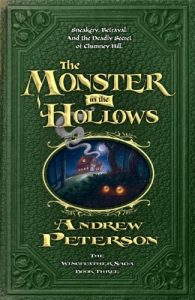 While there is an undercurrent of humor and light-heartedness in much of the series, the Wingfeather books are meaty, particularly thematically. These books make a great family read aloud choice because every member of the family is likely to resonate with at least one character. But know that great sacrifices are made on the part of those very characters readers grow to love. Peterson’s biblical worldview comes through clearly as the Wingfeathers and their loyal subjects constantly refer to the Maker, seek to live out their faith, and picture in their actions many of the great truths of Scripture. Fantasy lovers will find this an easy series to enjoy. Those who are not into myriad made up names and creatures might find it a little harder to get into, but most will find it worth the effort. For more detailed reviews, see our review of North! Or Be Eaten and The Warden and the Wolf King.

Note: as with many epic fantasy adventures by Christian authors (*ahem* Tolkien, ND Wilson, Andrew Klavan…), violence can be intense. The bad guys are, well, bad. In contrast, the heroes stand out as true heroes. That being said, sensitive children might want to wait a bit before tackling this series due to the bittersweet sacrifices that occur. 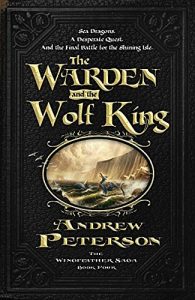 This is a series that will be discussed in our upcoming Beauty and the Beast Read Along! Look for it in the devotional discussion for “Beast.”

Fantasy provides opportunities for authors to picture spiritual symbols, themes, and truths without having to figure out how to place them in our real world. Look for the following themes and imagery in this series–don’t belabor the point with your delighted young readers as they scarf the books down, but do keep these in mind for teachable moments!

For more works like this by Christian authors, see The Wilderking Trilogy, The Ashtown Burials series, The 100 Cupboards series. See also The Wingfeather Tales, a unique companion volume to this series. And, for fans of the series, check out the official Wingfeather Saga blog! Andrew Peterson is also the founder of The Rabbit Room, a collective of Christian artists.