Children will be fascinated by the heartwarming story of “Doc” Key and his amazing horse Jim, who used their talents for good. 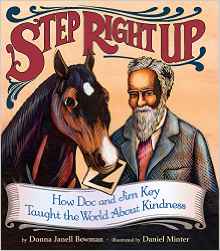 The boy was named William when he was born in slavery on a Tennessee plantation.  While still a youngster, he showed such a remarkable ability with animals that white folks for miles around requested his services for their ailing livestock.  His success rate earned him the nickname “Doc.” After the Civil War, Doc went into business as a veterinarian, selling enough homemade remedies to buy a mare and pay stud fees to produce a prize racehorse.  The colt was a disappointment, so spindly he could barely stand.  But Doc was too tenderhearted to put the colt down; instead he nursed him to health and named him Jim.  Before long, Jim showed signs of unusual curiosity and acumen.  Curious about how much a horse could learn, Doc began teaching him letters, numbers, and numerical values. In time, Jim could recognize words and perform calculations by counting with one hoof, and it didn’t stop there.  Doc and “Beautiful Jim” Key went on the road to become a traveling sensation.

Their partnership wasn’t just a moneymaking enterprise, though.  The man was born a slave and the horse was born a potential reject—together they proved that disadvantages are not necessarily drawbacks.  At every lecture stop and sideshow, Doc stressed the importance of kindness and patience in caring for God’s creatures, while Jim demonstrated the results of Doc’s God-given talent.  Throughout most of history, animals were often treated callously, but Doc and Jim, together with the SPCA (which was formed around the same time), helped wake people up to the benefits of humane treatment. Their story, illustrated in woodcut-style pictures that lend a sense of place and time, will both inspire and fascinate.