If the Magic Fits by Susan Maupin Schmid

This light-hearted fantasy mystery is perfect for girls who like spunky housemaids, personable princesses, and delightful dresses. 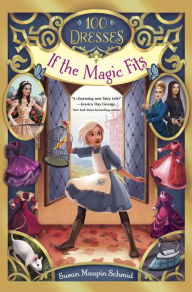 Darling Dimple, age 10, was born in the castle to a mother who promptly breathed her last.  Brought up by good-hearted Jane, official under-slicer in the castle kitchen, Darling is looking forward to a similar culinary career when she is suddenly promoted to under-presser of Princess Mariposa’s prodigious wardrobe.  In between ironing sheets and towels, Darling discovers a closet of unused dresses that appear to have minds of their own—so much so that when she tries one on she is transformed into someone else.  While exploring as someone else, she learns of the two somnolent dragons who adorn the castle, and a plot by one of the Princess’s suitors (along with an unknown accomplice) to unleash the dragons and take over the kingdom.

Darling is the kind of plain-spoken, spunky heroine tweens and young teens can root for.  She also possesses a clever turn of phrase that makes her a winsome narrator.  Though slow to start, the story builds to a nice arc with classic mystery memes and a surprise ending—with, I presume, more episodes.  Girls who like dresses—I was one—will love it, and also appreciate the thirty-five different ball gowns that adorn each chapter heading.  Aspiring fashion designers may want their own copies of the book for coloring purposes.

Cautions: None.  (An earlier version of this review speculated that Darling was the result of an affair, not a marriage, an assumption corrected by the author.)