When I was a child I read large numbers of mysteries and was always somewhat irritated when I had to go to math class. I did just fine in math class, but all that specificity got in the way of my more verbal and creative side. If you have children that sound like this–or, believe it or not, if you have children who might not have fallen in love with reading but are in love with math and science, the books below might be just the ticket.

“You.
Me.
People,
Not Numbers.
So, we will not change
Even when you subtract a friend.” 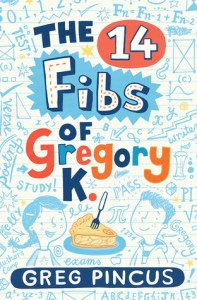 That is one of 14 “fibs” written by Gregory K. titled “The Correct Equation.” “Fibs” has a double meaning in this likable middle grade novel; Gregory tells several fibs (lies), but he also invents a new poetic form based on the Fibonacci sequence–he calls them “fibs.” (This form is not original to this book.) Gregory K. is one math-a-phobic sixth grader, but he comes from a family filled with math geniuses. Gregory would much, much rather be writing and shares this love of writing with his best friend Kelly. Together, they want to go to Author’s Camp during summer break. Because Gregory is so different from his family, he starts telling fibs. He thinks his mom and dad won’t understand his desire to write. Instead, he brashly claims that he will enter “City Math,” a city-wide math competition; his father was the winner of the very first competition, and his older brother has his own stellar track record. Gregory thinks that if can do well at something like City Math, his parents might let him do Author’s Camp. Gregory tells fibs to Kelly, too, about whether or not he has already secured permission to go to Author’s Camp with her. In the midst of Gregory’s troubles comes the alarming news that he is also failing math, something no one in his family has ever done. Thankfully, Gregory’s math teacher recognizes Gregory’s writing abilities and manages to help Gregory both understand math better and discover a way to excel at math in his own unique style.

Gregory doesn’t win the City Math contest, but he does come to a better understanding of who he is apart from his family and learns how to be a better son and a friend. The relationships within his family are wonderfully believable, and the book is filled with great details (like the pie shop Kelly’s mom owns: its name is “The Slice”). Gregory matures throughout the book and both math geeks and writer types will enjoy the humor, the information about the Fibonacci sequence, and the sibling rivalry. The book is not a “book-with-a-moral,” but it still drives home the point that lying isn’t the best way to accomplish one’s goals. In fact, it only makes things worse. The book also reminds us that each person is created with unique gifts; while the book doesn’t use this language, it still reinforces that we glorify our Creator best when we are using the gifts he gave us and not trying to fit into a different mold. 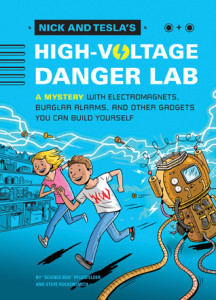 Nick and Tesla’s High-Voltage Danger Lab: A Mystery with Electromagnets, Burglar Alarms, and Other Gadgets You Can Build Yourself by Bob Pflugfelder and Steve Hockensmith. Quirk Books, 2013. 240 pages.

Budding engineers and other science- and gadget-lovers will enjoy this charming new series co-written by Science Bob, an elementary school science teacher.  Nick and Tesla are twins who are sent to live with their very eccentric inventor Uncle Newt whilst their parents are on some mysterious “work” trip. Nick and Tesla are given free rein in Uncle Newt’s lab, and they put their own science skills to the test to solve a mystery. There is also a bit of top secret government action.

Fast-paced and filled with several sets of directions for gadgets and experiments young readers can do at home, this mystery series will delight anyone who enjoys tinkering with household objects and crafting science experiments. The book is much shorter than its 240 page limit indicates; several pages are taken up with diagrams and directions for the experiments. Illustrations also dot the narrative pages. The writing is similar to what you might expect in a formulaic mystery series, but the hands-on experiments add their own charm. 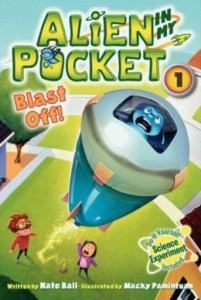 This new series by the host of Design Squad starts off with a bang—a tiny spacecraft, about the size of a chicken, blasts right into Zach McGee’s bedroom.  The tiny blue alien inside is not intimidated by Zach, but the family cat is another story.  After that scary encounter, alien Arp (from planet Erde) is convinced he needs to get a message to planet Erde about their size miscalculations about earth—cancel the invasion!  Problem is, his spacecraft is wrecked and in order to fix it, Zach is going to have to get serious about science.  The reader can get more serious about science as well, but doesn’t have to in order to follow the story, which involves mind control by the little alien and resulting silly situations.  Most readers will want to make a rocket out of a two-liter soda bottle, and instructions are included (along with warnings about not doing this without a responsible adult).  The basic problem (getting Arp back to Erde) doesn’t get solved, but this is only #1 in the series.  The story is light and fluffy with a little science thrown in, and aims for a slightly younger readership than most series books of this kind. (Next title in the series: Science Unfair.)

Looking for more math/science tie-ins?  We’ve got lots!  See our posts on “Creative Math,” “Look Up! Bird-Watching in Your Own Backyard,” “Solving Mysteries with Science,” and “Our Favorite Science Books.”