*The Imagination Station (Series) by Marianne Hering and Paul McCusker 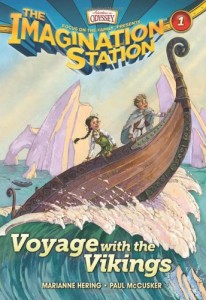 Enjoy this post from our archives! Originally published May 21, 2015.

*The Imagination Station Series by Marianne Hering and Paul McCusker. Focus on the Family, 2011-present. 130 pages each.

Mr. Whitaker is the proprietor of Whit’s End: ice cream shop on one floor and inventor’s workshop on another. His most interesting invention is the Imagination Station, a sort of time travel machine, which he uses to send cousins Patrick and Beth on various missions back in time. The missions range from educational (meeting George Washington) to fulfilling requests from the past (finding a Viking sunstone or mysterious goblet). Mr. Whitaker always gives each of the cousins a special “gift” that they will find useful at some point in their journey. He then sends them to a particular time and place…in costume.

Series fiction at the chapter book level is nothing new, but what sets the Imagination Station series apart from many of its contemporaries is its Christian worldview. For instance, Patrick and Beth stop and pray when they get in trouble. Many of the historical figures they meet are Christians. Sometimes this means the historical figure is being persecuted, while other times the figure is someone like George Washington who was reputedly a believer. Aside from the Christian worldview underpinnings, the writing is certainly equal to other series fiction at the chapter book level.

Action packed, full of historical facts and adventure, and saturated with spiritual truth, this series is more than simply a “Christian version” of the popular Magic Treehouse books. Both boys and girls will enjoy Patrick and Beth’s adventures, and parents and teachers may be surprised at the nuggets of truth children glean in the process. Highly recommended and worth owning if your library doesn’t have them. When your children are finished (allow time for lots of rereading), gift these to your church library or local Christian school library.