Recently it struck me that in no other religion is faith so central as Christianity.  Think about it: generally speaking, Buddhism stresses contemplation, Islam action, Confucianism conduct, Hinduism resignation, and Judaism is all about the greatness and majesty of God himself.  Yahweh’s people are commanded to hear and obey him and have no other gods before him, which of course requires faith.  But surprisingly, the word faith is not used that often in the Old Testament.  Belief in God may be taken for granted, in a way; he speaks, we listen.  But in the New Testament, the word explodes—occurring at least ten times more than in the Old.  Also, “Belief”—“Do you believe I can do this?” “Don’t doubt, only believe.” “Believe on the Lord Jesus Christ and you shall be saved.”

Christ sees faith (belief) as a power, even a virtue.  By it his followers move mountains, conquer kingdoms, overcome the world.  Through faith we stand, live, and claim an inheritance as children of God.  It’s almost as if faith were God’s secret weapon awaiting the appearance of the perfect object of faith: “A savior, who is Christ the Lord.”  And like many other treasures in the storehouse of Christianity, the modern world has co-opted faith and secularized it as The Power of Positive Thinking.  Countless Christmas movies, from Miracle on 34th Street to Elf to this year’s Believe, urge us toward the power of faith, without too much specificity about what we’re believing in as long as it’s cozy or comforting or nostalgic. 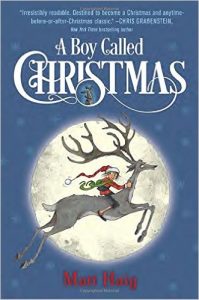 mantra. In the cold forests of Finland, long ago, there lived a poor woodcutter named Joel and his son Nikolas.  The boy would have said he was happy but it can’t be denied that one or two nice presents would have brightened his life, especially after his mother fell down a well after being chased by an elf.  All Nikolas has are a wooden sleigh made by his dad and a doll carved out of a turnip which is slowly going rotten.  Even that small bounty is taken from him when his father borrows the sleigh for a (hopefully) lucrative elf-hunting expedition, and his horrible Aunt Carlotta cooks the turnip.  In despair, Nikolas decides to go hunting his father, and (just his luck) it’s winter.  The boy almost freezes to death before he’s rescued by a kind-hearted elf and taken to Elfhelm.  But worse is to come–before Nikolas eventually emerges as none other than Father Christmas.

Although it’s fun to see the Santa elements come together, the theme of Nikolas resurrecting “magic” in a world of cynics is overdone.  (He finds, for example, that he can expand time—and chimneys—indefinitely by the right kind of faith, and thus visit every child in the world on a single night.)  Nikolas even becomes a kind of God/man with a dual nature: “He would unite the human bits with the magical bits and maybe one day he could change not just Elfhelm but the lives of humans too.”  This change is built on ideas of hope and goodness that don’t have a lot of substance behind them, but that’s how the world gets things backward: belief itself matters more than the thing believed.

“By faith” is the jewel of Christianity, next to Christ himself.  He came down to gather us in and draw us up.  By faith we participate in the great drama of redemption, caught up in heavenly councils, gaining the ear of our almighty Father.  By faith, our hope is built

Than Jesus’ blood and righteousness.

Enjoy those miracles on 34th Street or wherever you find them on your TV screen or on the page.  Just remember these are borrowed wonders from the greatest wonder of all.