*The Inquisitor’s Tale by Adam Gidwitz

*The Inquisitor’s Tale, or, Three Magical Children and Their Holy Dog by Adam Gidwitz, illuminated by Haten Aly.  Dutton, 2016, 384 pages 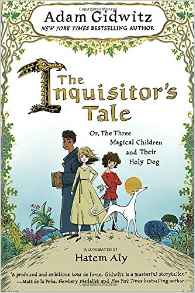 Holy Cross-Roads Inn, outside Paris, March 1242: a nameless agent of King Louis IX (the legendary “St. Louis”) is on the trail of three young people who happen to be on the King’s Most Wanted list.

“So,” I say, rubbing my hands together.  Does anyone know anything about these kids? The wanted ones? And their dog?”

Turns out he’s picked the perfect place to ask, because the patrons of the inn seem to have known one or more of “these kids” personally: Aron the butcher, Marie the Brewster, Gerald the chronicler, and most of all, a little nun with a sly smile and a taste for ale.  Among these travelers, the tale of three magical children spins out.  Jeanne is a peasant girl who falls into trances and sees visions.  Jacob is a young Jew, victimized by “Christian” thugs who burned his village down.  William is the son of a crusading lord and his African mistress, a giant of a youth now studying for holy orders.  They have a pet: Gwenforte, a greyhound who died heroically and was resurrected and is now venerated by illiterate villagers.  And they have a nemesis: the “Red, Fat, and Wicked” friar, Michelangelo di Bologna.  And finally, they have a mission: to deliver a treasure to the abbey fortress of Monte-St. Michele before the King’s men, and a vindictive queen-mother, catch up to them.

After sorting out many characters and grasping the main plot thread (first few chapters are a little confusing), the story skillfully builds.  The title characters learn to respect and trust each other, friends are revealed as enemies and vice versa, and heartbreak leads to triumph in a stirring conclusion.  An effortless blend of medieval detail, contemporary snappiness, and slightly gross humor (there’s nothing like a dragon with deadly farts!) keeps the reader engaged.  But the story becomes more than an entertaining read when it veers into philosophy and theology.  Most reviewers cite the themes of religious and social tolerance.  Well and good, but while making that point the author brings in some of the most vexing questions of the ages, such as How can a good God tolerate evil? and How do we know what’s good?  An orthodox Christian will disagree with some of the answers, but all readers will find lots to talk about (see below).  The author doesn’t stop talking, either; see his extended author note for more background and discussion-fodder.  “Illuminations” in the manner of a medieval manuscript are worth attention (and smiles) all on their own.

Cautions: Violence (semi-graphic), Language (limited use of medieval cursing, such as “God’s wounds,” etc.  Most uses of God’s name are in reference to GOD)