The Last Dragonslayer by Jasper Fforde 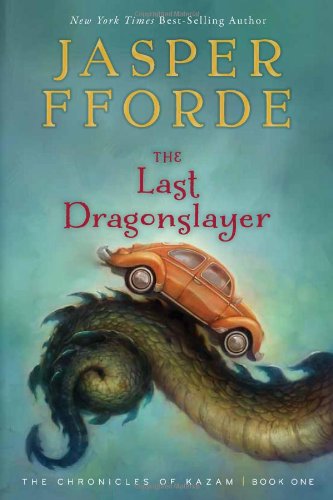 Reading Level: Young Adult, ages 12-15
Recommended for: Ages 14 and up

Jennifer Strange has her hands full.  Magic might be dwindling in the Ununinted Kingdoms, but government bureaucracy is not.  Jennifer, almost 16, is temporary manager of Kazam Mystical Arts Management.  This means a good deal of paperwork, since all magic must be duly noted and filed. Even so, as Jennifer observes, “the job is less about spells and enchantments, diplomacy and bureaucracy, than about babysitting.  Working with those versed in the Mystical Arts was sometimes like trying to knit with wet spaghetti.”

News that the country’s last dragon is about to die brings a wave of excitement.  (A dragon’s death breaks magical boundaries leaving dragon land unoccupied and free for the taking).  When it becomes evident that Jennifer is connected with the dragon’s death, she is brought to national attention.

As Jennifer learns about dragons, she grows increasingly certain of a misunderstanding.  This particular dragon is not doing anything wrong . . . why should he die?  Dealing with corrupt government officials —not to mention the occasional disgruntled sorcerer— and tailed by her faithful quarkbeast, Jennifer soldiers on to the story’s unlikely ending.

Despite being about a girl, this is not a book targeted for girl readers.  Fforde’s style is dry and often humorous.  Though his characters are not deep, the alternative reality he creates is variegated and engaging.

To quote Redeemed Reader’s Betsy: In true Fforde style, this book is a satirical fantasy. The ending is quite post modern and unsettling, turning the tales on the usual “power of love” and “love conquers all” theme that frequently motivates our fantastic heroes. . . . When read as a satire, though, it is enjoyable and enlightening.

Realizing the story is satirical, fantasy lovers and Anglophiles should enjoy this story and its spunky heroine.