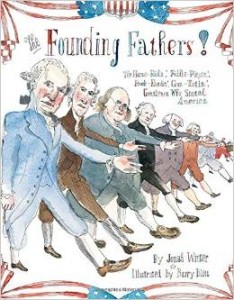 Fourteen of the men who made the speeches and wrote the documents that shaped our nation receive cartoony treatment that contains some interesting nuggets of fact.  Each founder receives a two-page spread in this slightly oversize picture book, with a full-color caricature on the right and dossier-style facts on the right.  The facts include famous quotes; height/weight/shoe size; political leanings (George Washington: straight (did not lean); education; land holdings and wealth (including slaves); and positions on slavery and the Boston Tea Party.

The full title should tell you what you’re in for: an approach so casual it’s almost lying on the floor.  The plusses are that men who are often slighted, like Dr. Benjamin Rush, Gouverneur Morris, and John Marshall receive fair treatment.  The author neither idolizes nor denigrates these men nor makes their virtues hinge on whether or not they owned slaves.  The big minus is mostly a matter of style, which is over-colloquial and inconsistent and sometimes stretches too far for effect.  For example, regarding Thomas Jefferson:

Dude thought of himself as a “man of the people”–a regular guy, a farmer . . . but he was a total rich guy who owned an awesome mansion called Montecello which he himself designed.  [But when he wrote about life, liberty, and the pursuit of happiness], This was like a TOTALLY new concept that changed the world (cool!)

The text also makes a little too much of certain features.  For instance, we get that John Hancock was rich.  No need to showing him sleeping on bags of money.  Middle-graders will pick up some valuable information, but not much respect.