The Dragon and the Garden by N. D. Wilson and illustrated by Peter Bentley 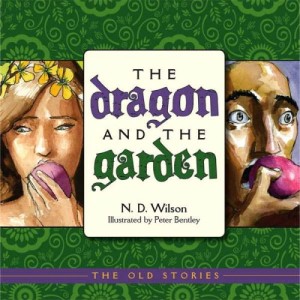 The Dragon and the Garden (The Old Stories) by N. D. Wilson and illustrated by Peter Bentley. Canon Press, 2007. 32 pages.

N. D. Wilson brings his facility with words and storytelling to the stories in this picture book series featuring biblical characters such as Adam and Eve, Noah, and Abram. This first is the familiar story of Genesis 3 in which Adam and Eve are tempted by the serpent in the Garden of Eden.

Rather than retelling the biblical version in simpler terms for young readers, Wilson elaborates in the style of Paradise Lost. The serpent is a great Dragon imbued with characteristics and emotion: He was very proud of his bright skin and his eyes, and he moved and twisted around Eve so she could see them. Other elements are also given extra biblical details including Adam and Eve’s relationship and the effects of their fall from grace.

Bentley’s illustrations add much to this picture book and are in keeping with Wilson’s Medieval retelling. Imaginative and colorful, they picture a rich, vibrant garden. They also point to Christ, the Great King who would remake the world…and undo all the evil that Adam and Eve had done.

Wilson and Bentley’s collaboration is a welcome contribution to biblical picture books which are often bland in tone and which, too often, stop just shy of pointing young readers to Christ. However, readers do well to note the extra biblical information included in story in the details mentioned above. This book is probably best suited for children who already know the biblical story well.

Cover image from amazon; free copy of book provided by publisher in return for a fair review