Every Valley by Albert L. Blackwell 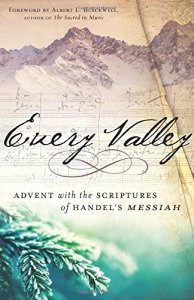 Handel’s Messiah bursts on our ears this time every year even though many of the oratorio’s texts harken to the death and resurrection of Christ. Still, the Messiah is widely regarded as an Advent-related work, pointing us to meditation on the incarnation of the Messiah. The idea of a series of mediations on the Scriptures behind the oratorio is not a new one, but this fresh compilation is well thought out. Forty meditations on the texts are designed to take the reader through Advent until the day of Epiphany (the historic end of the 12 days of Christmas). The text of the Messiah along with the corresponding texts from the NRSV Bible and a reflection on the texts comprise each day’s devotion.

The general slant of the devotional selections is in keeping with the Episcopal Church and other mainline denominations: emphasis is given to social justice causes, discussion of the incarnation and the Messiah often occurs in somewhat general terms, and there are references to such biblical hermeneutical approaches as First, Second, and Third Isaiah. For instance, one section raises the idea that “God’s ultimate justice” might be in conflict with God’s grace: “as if God is not free to reconcile those he loves without the cross as a legal transaction.”

While many of us might prefer a more targeted approach to Advent, one more in keeping with the terminology of traditional evangelical theology, there is much worth noting in this collection. It is easy to become inured to the familiar phrasings we hear in our regular church going in this Advent season. Instead, this collection challenges us to look at more than just the babe in the manger. Readers are called to ponder the magnificence of the Creator who stoops to send a babe into the world as the Messiah—something only the Creator of the universe can do. The justice of Christ’s reign will include restoration for all of creation, not just human believers. Our response to the salvation offered in Christ should first be one of awe and worship—like the shepherds. And what must the Old Testament believers have thought of these promises and prophecies of the Suffering Servant? The Wonderful Counselor? The Prince of Peace? Texts proclaiming that Israel’s warfare has ended would have burst on their ears with a different sort of hope than we often consider in our 21st-century American churches. There are moments of true hope such as these:

The psalmist’s faith and Christ’s oneness with God do not belie the despondency those in peril feel but rather prove that one’s personal connection with God is not eradicated even by the most agonizing despair. God continues to be ‘my God.’ (in reference to Psalm 22)

One writer has suggested that a silversmith knows that the refining process is complete only when she observes her ‘own image reflected in the mirror-like surface of the metal.’… Is humanity deemed good and righteous when once again the divine image is reflected in the human heart?… There may be questions regarding the process, but the promise of this restoration and refining is sure. It will happen, and it will happen under God’s control and in God’s time. The refining is not waiting for us to feel good about it. God’s promise is sure, and it is good news. (in reference to Malachi 3)

Worthy as a tool to prompt us to marvel at the Lord’s power and majesty, a reminder to delve into the Old Testament texts in particular, a calling to appreciate the magnitude of what the incarnation means, and a means to hear the Messiah with new ears, this is a refreshing approach to Advent. It is recommended for mature believers, especially music lovers, who will enjoy gleaning from the devotional texts even while they may disagree here or there or wish for more specific language on occasion. It is also worth having a good recording of the Messiah on hand while you read!

Cover image from amazon
A free copy of this book was received from netgalley for a fair review.

!
!
Get Equipped
Something went wrong. Please check your entries and try again.
Posted in (G) Ages 16 and up, Book Reviews, Christian, Nonfiction, Teen/Adult, The Good Book