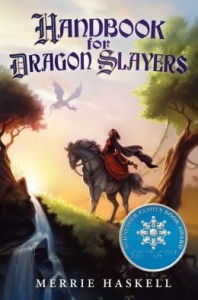 When our story begins, Tilda, age 13, has no interest in dragon-slaying; she just wants to write the definitive book on the subject.  Or the definitive book about something.  Due to a lame foot and a retiring personality, she’d just like to be left along to pursue scholarship under the tutelage of her beloved Father Ripertus.  Too bad she was born a princess.  Granted, Alder Brook is a very small kingdom, but responsibility is responsibility and with her father deceased and her mother a duty freak it looks like there’s no way out of pedestrian royal chores.  “Why does being a princess always come down to taxes and cows?” she sighs.  When her mother is detained while visiting another kingdom (probably arranging a marriage), Tilda must entertain her conniving cousin Ido.  A brilliant idea occurs to her: why not turn the kingdom over to him?  He wants it, he’s better suited for it (no lame foot), the people will respect him more (ditto), and it will leave her free to follow a calling she’s better suited for—namely, dragon-hunting with her friend Julia and stable hand Parzifal, gathering material for her dragon tome.

But calling is not something you decide for yourself, as Judith explains: “It is your duty to deal with need, not want, and you need to rule Alder Brook—and Alder Brook needs you.”  In spite of her flaws Tilda is an appealing character, and her friendship with Judith is especially nuanced and well done.  The worldview is compatible Christian with lavish elements of magic, mostly having to do with dragons: are they wicked and cruel, or more like people than people would like to admit?  Tilda comes to a wise conclusion:

Of course, sometimes Dragons are not dragons at all—but human boys (or girls) trapped within scales or claws.  If you can overcome your fear and show these trapped creatures kindness and love, you may just discover the truth inside them. 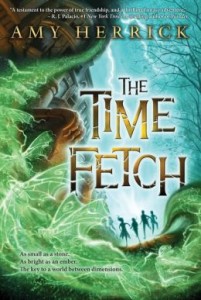 “Without time everything would happen all at once,” says Edward’s Aunt Kit.  And– “If everything happened all at once, there would be only darkness and chaos.”  This comes at the beginning of the story, so we’re not surprised when her dire warning begins to come true.  Before that happens, our author must assemble a team of four diverse personalities—cynical Edward, extravagant Feenix, brilliant Danton and shy Bridget–and rub the sharp edges off so they can work together as they figure out who or what is fetching time.  Good character building, clever writing and an intriguing concept distinguish this novel, though it falls into a standard pattern (kids must thwart evil genius to save world).  The plot leans heavily on pagan superstitions about the winter solstice, when supposedly the barrier between the material and spiritual worlds grows dangerously thin: “Doorways open at this time of year.  Something’s been set loose that shouldn’t have been.”  The villain turns out to be the Unraveler, who appears to despise matter and all its manifestations, much as Satan does.  In fact, we can imagine the Unraveler’s words in Satan’s mouth:

“Why the grand campaign for everything to reproduce itself?  Why all that furling and unfurling of DNA, all that winding and unwinding, all that Sturm und Drang [storm and stress], fuss and pus and bloody mess when everything ends up dissolving back into nothing anyway?”

Maybe because God ordains and loves it?  There’s no mention of God, except of the “Oh my G-d ” variety.  But the story ends with warmth and holiday baking and a traditional Christmas carol—recalling, whether the author knows or not, a time when the material and spiritual wore beneficially thin.  This is a story that comes to some Christian conclusions by some unchristian means, which shouldn’t be unusual.  Truth is truth.

River, Fiona, and Freak are a little curious as to why there was a sofa at their bus stop.  But that 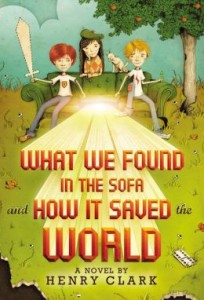 doesn’t stop them from sitting on it.  It was probably just waiting for Wednesday trash pickup, except that this isn’t Wednesday.  Eventually they do what everyone eventually does with a sofa, that is, search under the cushions.  There they find, among other mundane objects, a Crayon and a domino.  As it happens, the Crayon is from an extremely rare, limited edition set that collectors would pay good money for, and as for the domino . . . Well, both are the property of a visitor from an alternate world, whose father long ago crossed over through a mysterious portal and turned the nearby chemical plant into a staging ground for an eventual takeover of the neighborhood.  (Tomorrow—the world!)  The plot is already underway, and that explains why town residents have lately developed a propensity for flash mob showtunes.  If you think I’m giving too much away, I’m only up to page 50.  There’s a lot of original flash and dazzle surrounding a shopworn plot (global domination, evil but dumb henchmen, and of course, saving the world), but it’s funny and includes some irresistible flourishes, like a six-story high inflatable toilet.

There’s a LOT of middle-grade fantasy out there, which is one reason why we keep reviewing it.  Just last week Hayley and Betsy reviewed two new titles.  For some of my personal favorites, see our reviews of Mr. and Mrs. Bunny, Larklight, Secrets at Sea, and Chitty Chitty Bang Bang Rides Again .