The Larklight Trilogy, by Philip Reeve, decorated throughout by David Wyatt: Larklight (2006), Starcross 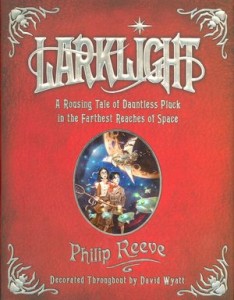 Ten-year-old Arthur Mumby, his irritating teenage sister Mytle, and their absent-minded father are minding their own business at Larklight, their earth-orbiting home, when they suddenly find themselves playing host to an invasion of spiders. Not the kind you can whack with a rolled-up newspaper, but enormous creatures with “bodies as large as elephants’, and legs as long as trees.” In short order these creatures have disabled the gravity generator and disabled Father by spinning him up in a cocoon. (As it wasn’t so long ago that their mother was lost aboard a space vessel on its way to earth, this is a low blow.) The same spidery fate would have befallen the children, had not Art herded Mytle into their Deadalus Lifeboat and pulled the launch lever. They hope to be rescued by the Royal Navy, whom they can then direct back to Larklight to see what remains of poor Father . . . but before that happens, they crash-land on the moon, where they make the acquaintance of a band of space pirates led by the notorious Captain Jack Havock.

Thus begins an epic interplanetary adventure with the flavor of Rider Haggard and a credibility factor of zero. It’s not quite steampunk, and definitely not science fiction, unless the science is based upon the theory of aether-filled space (which was discarded at the beginning of the 20th century), and an alternative history of the alchemical discoveries of Isaac Newton. In this universe, aether ships ply the starry seas propelled by a half-magical force produced by the chemical wedding, and Britannia rules not only the waves but a good deal of the solar system. Though technological progress has been quite remarkable since Newton, social mores have moved with the stately pace of Queen Victoria herself (who appears in Books One and Three). 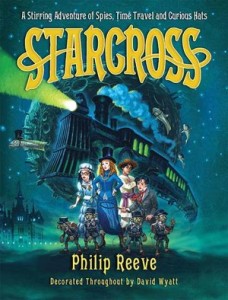 As a child of the Empire, Myrtle Mumby is the epitome of proper, which rankles not only her brother Art, but also most of the readers. Nonetheless Jack Havock (who is only a teenager himself) develops tender feelings for her, and their relationship will suffer its ups and downs throughout their adventures. Art, Myrtle, and Jack are the dynamic trio, as is only right in a series for young readers, but other characters–human, mechanical, and extra-terrestrial–abound: Sir Richard Burton the intrepid explorer and his Martian wife Ulla, the Tentacle Twins, Nipper the giant crab, Prof. Ferny (who seems to be some kind of mushroom), Reverend Cruet (missionary to Georgium Sidus) and his daughter Charity, shape-shifting Moobs, wool-loving Threls, and many, many more. The most interesting of all might be Art and Myrtle’s own mum, who turns out to be not only alive, but alive for something like four billion years, during which she created a good deal of the universe. Does that mean she’s some sort of god?  Not at all . . .

“Think, dear,” said Mother. “Who made the Universe and lit the suns? Who shaped the Shapers? For Shapers are not gods, just servants of that invisible, universal will which set the stars in motion.”

Mother is a bit like Mrs. Who, Mrs. Whatsitt, and Mrs. Which of A Wrinkle in Time, except she chose to become human because she fell in love with them (and one human in particular). Not too much should be read into this, theology-wise. Larklight is light reading, but it’s exceedingly fun to leap with Mr. Reeve’s lively imagination from the Great Storm of Jupiter to the cheese-moon Querp. I dig those Victorian sensibilities, too: watch Myrtle striding across the plains of Mars with Ulla, singing “He Who Would Valiant Be” (by John Bunyan) at the top of her lungs to keep the natives at bay. Myrtle, as previously noted, carries propriety to exasperating lengths, but she comes into her own by the end, even converting a species of women-warriors who are weary of running things and want to try out hoopskirts and parasols.

I suppose it’s not for everybody; no book is. But for nonstop action with liberal dashes of British humor, it’s hard to beat. Even the chapter headings and the “About the Author” page are fun.  Huzzah!