As Emily informed us yesterday, September is science and science-fiction month, featuring our read-along of Orson Scott Card’s classic novel, Ender’s Game.  To celebrate, we’re focusing on youth science fiction this month, starting off with three new YA novels that raise an interesting literary question: what’s the difference between science fiction and fantasy?  Most readers understand “sci-fi” as taking place in a future (near or far) that is conceivable–though usually unappealing–through technological advances and takes place either here on earth or on a distant planet.  Fantasy can do that, too, but the main difference, as I see it, is that fantasy always includes some form of “magic”: actual sorcerers, alternative worlds, or a transcendent power that science can’t explain.  So Star Trek is sci-fi; Star Wars (with its mysterious Force and telekinetic powers) leans more toward space fantasy.  These three new YA novels represent examples of fantasy (A Corner of White), sci-fi (Bubble World), and The Rithmatist (elements of both). 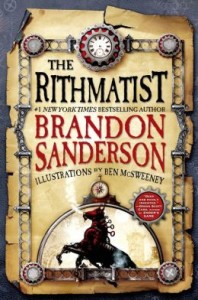 Joel Saxon, 16, is an indifferent student at Ardemius Academy—he’s only there because his late father Trent was a highly respected maker of chalk, and chalk is a priceless commodity to the Rithmatists, that select group of divinely appointed draftsmen (and women) who can draw figures (Chalkings) that come to life.

Drawing is a science not an art, with its own rules, tactics, and strategies, and Joel longs to be counted among the vital few.  Burt he didn’t receive the nod during his Inception ceremony (a ritual of the Monarchist church which corresponds to baptism), and that, added to his status as a charity student, make him second-class in more ways than one.  This isn’t good for his morale—he’s already failed one term and is on probation for the next.  “School is about learning to learn,” the headmaster tells him.  “If you don’t practice studying things you don’t like you’ll have a very hard time in life.”

Joel needs focus, and soon has it when a series of kidnappings (or murders?) throws the school into a panic.  In the course of tracking down the culprit, Joel discovers unusual talents in himself, a loyal mentor in the wise and slightly doddering Professor Finch, and an able partner—eventually–in Melody Mons, a feisty redhead who spends most of the book getting on his nerves (and ours).  Rithmic diagrams and brief lessons in the science open each chapter, which will interest a few readers—all the rest can skim over with no loss.  The author is known for his world-building prowess (this is his first book for young readers); since almost all the story takes place on campus the world isn’t large, but there’s quite a bit of history and geography outside it.  Part steampunk, part alternative universe, part sci-fi and magic, the story took a while to build tension for me but comes to a satisfying conclusion while setting an intriguing premise for the next volume in the series.  Joel accomplishes some character building too, from a resentful goof-off to a more promising youth.  (“You’re young, Joel,” Professor Finch admonishes him at one point: “Young enough to decide the man you will become.”)  With solid character values and no bad language or sex, The Rithmatist is worthwhile reading for the sci-fi and fantasy enthusiast. 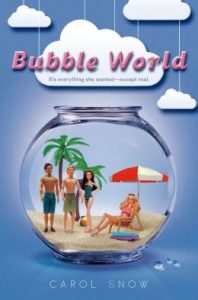 Freesia Summers awakens every morning to sunlight dancing on the waves, an ocean view, singing (not squawking) peacocks, and a perfect family: affirming mom, adoring little sister, and comfortably disconnected dad.  Boyfriends and besties are available at a touch of her magic bubble and school is a breeze: her teachers are open to suggestion, and every class includes snacks.  “Down time” is for shopping and parties.  Too good to be true?

Yep.  Freesia’s name is really Francine Somers and her actual reflection in the mirror is dumpy and plain.  She’s also of a personality that might best be described as “difficult.”  Her parents, after years of struggle, fell for the smooth line of Todd Piloski (a Dr. Feelgood type; kids in Bubble World swear “by Todd”).  Instead of drugs, Piloski dispenses virtual-reality “educational” programs.  A glitch in the program lands Freesia/Francine temporarily back in the real world, which horrifies her.  But there’s more to her than meets the eye at first . . . .

There’s more to this book, too.  Ostensibly a breezy satire, once Freesia begins to grapple with reality she acquires dimension and even some depth as a person.  She still has some rough edges and dislikable angles—in dealing with a former friend, for instance–but unexpected sympathies also pop up.  Young teens with any discernment will pick up the moral easily, but it’s fun getting there.  There are one or two instances of bad language, some kissing, and a party scene that includes drinking (not positively), where Francine gets to play the part of responsible adult. 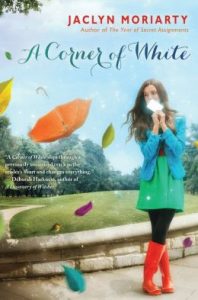 The setting swaps back and forth between the real and the imaginary—at least, “imaginary” is what Madeleine believes when she finds a note stuck in a parking meter: Help me!  I am being held against my will!  Cute, thinks Madeleine, but a few days later, on a whim, she tucks a response into the same parking meter: Me too.  Specifically, she who was once accustomed to a life of ease and wealth has been gobsmacked by her father’s disappearance and her mother’s escalating dottiness, transplanted to an upstairs flat in Cambridge where she homeschools with Jack and Belle among four part time teachers, including her mother.  It’s all crazy.

But it gets crazier when a letter appears in the parking meter from a boy who signs himself Elliot Baranski and claims to be from the Kingdom of Cello.  Really?  Yes, really, as we already know for the narrative begins in Cello.  The Kingdom used to be one and the same with the World but there was a division some time back.  Now the World has forgotten contact and the Kingdom forbids it.  But Cello’s existence has become perilous because the Kingdom is vulnerable to color attacks.  Some are rather benevolent, like fifth-level Red: “rich and warm, a lighter red, almost orange, [that] misted at the height of tall trees, drifting in broad boatlike shapes.”  But others, like second level Grey, can do real damage to body and soul.  Severe purple may have done for Elliott’s dad—or may not, but Elliot is determined to find out, and it just possible that Madeleine, distant as she is, may hold a key.

Quirky, unpredictable, unique, and often charming, with musing thoughts on forgiveness and belonging, A Corner of White will grab some readers and leave others cold.  There’s a certain emotional void in Madeleine, and also to some degree in Elliot, which over the course of the series (The Colors of Madeleine) should be overcome.  If a reader is intrigued by the premise enough to continue, there will very likely be some reward.  Cautions: a few occasions of slightly vulgar language and one minor character who muses on a same-sex lover from long ago.

For more teen science fiction (with or without fantasy elements), see our reviews of Ultraviolet, Divergent, Insurgent, Unwind, and the “Hungry Cities” quartet.  For romantic fantasy, I like Entwined and The Perlious Gard.  Be sure and check back on Friday, when we’ll be talking about new animal fantasy fiction for middle grades.