Space Odyssey for Little Ones: An Interview with Kevin Luthardt

Kevin Luthardt is an author-illustrator who has had a pretty big impact on our family through his picture book entitled Larabee.  (You can read about that in our 2012 interview with him.)  So imagine my delight upon learning that just in 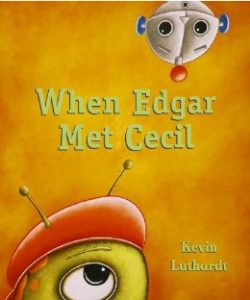 time for our Science September, Kevin has come out with a new sci-fi tale for kids!

When Edgar Met Cecil probably isn’t technically sci-fi.  It’s a familiar story of one “kid” who moves, meets the “kids” at his new school with fear and trepidation, but soon finds they aren’t the monsters he thought they were.  Yet however worn in some quarters (We won’t get into the folks who use it as a secular religion…), this is a storyline that has proven useful among kids who need a little boost of confidence to make friends.

What sets this book apart from the other books in the pack is, of course, Luthardt’s illustrations.  And that makes sense, considering Kevin began the project with a painting of an alien/monster/robot mural on his kids’ bedroom wall.  Inspired by the bright color combinations and intriguing characters, he decided to set them in a picture book and put them to work.  And for moms and dads who love Star Wars, C.S. Lewis’ Prelandria stories or even Ender’s Game, it’s a story that can serve to whet kids’ appetites for the weird, mysterious, and strange of outer space so beloved by dreamers throughout the centuries.

1.  On the book’s back flap, you say that When Edgar Met Cecil grew out of a mural you painted on your son’s wall.   What were you trying to capture for him with the mural? 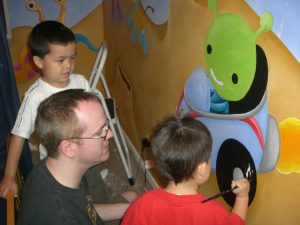 My boys wanted to turn their room into another planet with aliens, robots, and spaceships.  I didn’t want to just recreate famous robot and alien characters, so we made up our own.  My two oldest sons helped paint a couple of the characters, and they each designed a robot or alien character in the background of one of the pages of the book.  Edgar and Cecil were inspired by characters in the mural, but they evolved as I developed them in the sketching stage…so they look very different.

2.  Did you find any inspiration from certain books, movies…or perhaps weird friends?

I grew up on a healthy diet of Star Wars, so that is an obvious influence.  I used to love looking at preliminary drawings and paintings of the character developmental stage from those movies.  My kids are obsessed with those Star Wars character encyclopedia books now, too.  For the alien world, I wanted to have a frenzy of activity in the background.  My boys and I love reading picture books that have funny things in the background that you might miss on the first reading.

I actually think every person, including myself, is a little weird in his or her own way (that’s what makes the world so interesting) …but I will deny any direct references to real people in the characters in any of my books…to protect the innocent! : )

3.  The robots and aliens of Cecil and Edgar’s world definitely have a high weird factor, but they’re also cute and cuddly.  What’s the secret to drawing fun monsters/aliens?  Any thoughts on why you chose a bright, colorful palette as compared to a book like, say, Creepy Carrots? 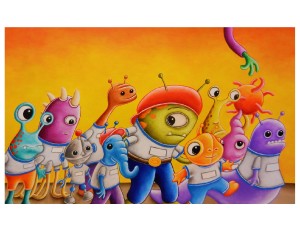 There are a couple things that influenced the style and color palette of my alien characters and planet environment.  I wanted the alien world to contrast from Edgar’s robot planet, which was a serene environment and had a subdued “cool” color palette with mostly blues, violets, and browns.  So, Edgar’s fear of this new home was heightened by the wild new colors of the surrounding world, the bizarre characters, and strange activities going on.  I wanted the alien characters to be “weird” but not actually scary looking.  The scariness is really in Edgar’s mind…which is shown plainly in his nightmare.  I guess the “cuteness” factor comes from using strong, simple shapes, button-like eyes, and bright crayon box colors.  their goofy and humorous facial expressions add to it as well.

By the way, Creepy Carrots is an awesome book, and was definitely deserving of the Caldecott Honot.  Peter Brown did some wonderful illustration work.  I have actually met the author, Aaron Reynolds, on several occasions (we both live in the Chicago area)–He’s a great guy and brilliant writer!

4.  Is there a moral to the story in your mind?  What would you want kids and parents/teachers to take away? 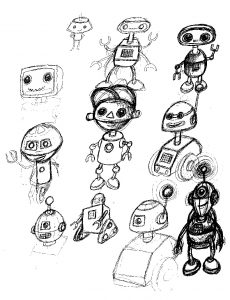 First, I hope kids and everyone else just enjoys the story and connects with the characters…even though they are robots and aliens.  The most obvious moral is not to judge other just by the mere fact that they look different or do things differently than you.  Edgar probably also learned a thing or two about facing his fears and making new friends after moving to a strange new home.  I think Cecil is actually the hero in the story.  He saw the new kid as a potential friend rather than an oddity.  He reached out to him even though he was a little timid about approaching him at first.  It’s worth noting that Cecil gained an exciting new friend as a reward for his boldness in reaching out.

5.  In your previous interview with Redeemedreader, you talked a little about your faith and how it impacts your work.  As an artist, a dad, a husband, a believer…did God teach you anything while you worked through the creation of this book?

Well, I certainly could learn something from Cecil in my attitude toward sharing the Gospel and God’s love with others.  I wonder how many blessings I have missed out on simply because I was apathetic, not bold enough, or because the fear of man held me back!

I was blessed in the making of this project because this time around my kids were more involved, watching me through the whole process.  I enjoy that they get to see me start a project and see it through to the end months and months later (sometimes years).  I am not sure how this will impact each of them, but I know that it will stick in their minds as they grow up and tackle their own projects…whatever they may be.  This weekend my wife and kids will join me in one of my release events.  I know that this aspect of my work is a gift.  Not all dads can take their kids to their office or wherever they work very often.  Kids don’t always get to see what their parents do when they go to work…I’m positive that when they do, it changes how they think about their parents.  This is my same attitude when we go to church.  My wife and I take every opportunity we can to worship, serve, and be together in church and ministry.  I teach Sunday school, and I love that my own kids are my students at different times.  God is good!

Thanks so much, Kevin, for sharing your thoughts on (and some of your sketches from) your excellent new book!

If you have a question or comment for Kevin, please feel free to leave them below.   I’d also love to know if you have a favorite sci-fi story.  If so, is it something you look forward to sharing with your kids?

For more science-related posts, see Janie’s review of The Rithmatist, our guest review of Whalesong, and our list of gardening books for kids.