Whalesong: A Review by Nathan Huffstutler

Earlier this year, when I first heard the name Robert Siegel doing research for these book reviews last April at World Magazine, I learned Siegel was a Christian poet who had recently gone home to his reward.  (Not to be confused with NPR reporter Robert Siegel–same name, very different guy.)  But he wasn’t just any poet; he worked within the halls of secular academia his entire writing career, standing as a man of God in seemingly godless places–Princeton, Harvard, and Dartmouth.  In fact, like many 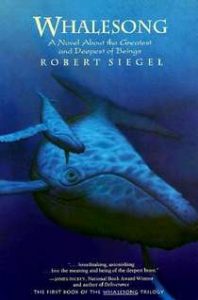 Christian youths, he grew up in a Christian home, but found his faith shaken once he went to a secular college.  Rather than give up his faith, however, he transferred to Wheaton College, and there found answers for his questions in the writings of C.S. Lewis, J.R.R. Tolkien, and thoughtful professors.

I was even more delighted to find that Siegel not only wrote poetry, but children’s books.  (You can see a list of his works here.)  Apparently, he wrote really good ones, though unusual in their subject matter.  As in the case of any talented Christian author, comparisons to C.S. Lewis abound.  So, I invited my friend Nathan Huffstutler, a professor at Maranatha Baptist Bible College and a dad to boot, to check out Siegel’s Whalesong trilogy for us.  Here is what he had to say.

As a thirty-four year old who tends to read non-fiction these days, I never expected to be captivated by a children’s story told in first person by a fictional whale.  But last year I discovered the work of Robert Siegel, and I found his Whalesong to be a delight.

Siegel, who died last December, was a graduate of Wheaton College and a Harvard Ph.D., and he taught creative writing at the University of Milwaukee-Wisconsin and other universities.  He published several novels and books of poetry, and his most frequent subject was animals–God’s glorious and sometimes quirky creations.

Whalesong, the first in his Whalesong trilogy, was published in 1981.  It is the story of Hruna, the humpback whale who is born in the Pacific Ocean and who grows to become the leader of his pod.  Hruna’s sense of wonder at the mystery of life and his growth in courage, responsibility, and sacrifice make this a great book for Christian readers.

When Hruna’s father, and the other adult males of the pod return from a long search for food, Hruna begins learning the ways of survival from them.  Through the challenges he faces, Hruna grows in maturity and courage.  When he attains adulthood, he falls in love with Lewte, a female whale that he has grown up with, and they become mates for life.

Eventually, Hruna is chosen to become the next leader of the pod.  As he takes on this responsibility, he learns the meaning of sacrifice, and he learns from experience that it is his role to provide for the pod and to protect it from attacks by sharks, killer whales, and whaling ships.

As Hruna learns from his mentors and his own experience, he attains the virtues of courage and self-sacrifice.  Also, the story contains a beautiful allegory of redemption as one of the older whales sacrifices himself to save the pod–a passage that refers to Christ’s sacrifice on the cross.

Although the story itself makes the novel worth reading, I also enjoyed the book’s elegant prose.  Siegel was a poet, and this novel demonstrates the beauty of a poem.  It is a whale song, and Siegel’s prose can make readers feel they are there in the ocean with Hruna.  Also, Siegel sometimes echoes the language of great works of literature such as Beowulf and Spencer’s “Epithalamion,” and he includes references to classic stories of the ocean like Melville’s Moby Dick and Coleridge’s “Rime of the Ancient Mariner.”

And yet readers need to have no experience with those works to enjoy the story as it is.  Whalesong is simply a great story, and it has remained a delight for young (and older) readers for over thirty years. 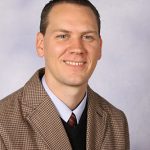 Nathan Huffstutler has a M. A. from Bob Jones University in English.   He teaches at Maranatha Baptist Bible College in Watertown, Wisconsin, when he’s not spending time with his wife and young daughters.

Do you have a question for Nathan about this series or Robert Siegel?  I actually did.  I read several reviews that called Siegel’s trilogy “environmentalist” literature, and I wanted to know whether Siegel represented nature in a way that reflected a Biblical understanding of Creation or whether his writing fell into some of the pitfalls of contemporary environmentalism, such as elevating the creature beyond what it should be.  (For instance, does he demonize whaling itself or just critique its excesses and abuses?)

Here was Nathan’s answer: In my reading of Seigel, I would not use the term “environmentalist” to describe him, although there are similarities. Like environmentalists, Seigel sees humankind as a danger to nature, but he is not “anti-human” in the sense that  environmentalists are. Instead of calling him Seigal an environmentalist, I would call Seigel a creationary conservationist. He sees all of nature, including the animal kingdom, as sacred, and therefore in need of human protection and stewardship. To Seigel, whales, as well as all other creatures on this planet, are beautiful creatures created by a marvelous God, and so we have a responsibility to protect them instead of exploiting them. So I think you’re right–I think that’s what he’s doing in his poetry and in his novels.

Do you have further questions?  Or perhaps an idea for a discussion starter for families with children who read this trilogy?  We’d love to hear them!