Summer Reading Challenge, Week 1: Around the World by Matt Phelan

***To find out more about this challenge, see  our Summer Reading Challenge introduction.  Other posts related to Matt Phelan’s books include our Interview with John Branyan and What’s in Your Handbag, Nelly Bly?***

As Betsy said yesterday in her fantastic introduction (which contained our list of more than 100 Great Adventure Books for Kids), welcome to Redeemedreader’s Summer Reading Challenge!  I don’t know if I’ve been this excited since our last reading challenge on The Hobbit .

Since this is our first week, I thought I’d start by describing what you should expect from us over the next eight weeks: 1) Each Tuesday, we’ll have a review of that week’s book along with discussion questions for your family; 2) Then on Thursday, we’ll post crafts, games, music or other ways you can engage your kids further.   The rest of the week, RR will post on other unrelated topics…so we hope you won’t have a chance to get bored!

If you need a reminder of our book schedule, it’s here.  One quick point about that–if you have more than one kid reading the books, or you have other things going on this summer, feel free to read ahead or behind.  They can even read the books out of order–that just means they’ll each take their own path around the globe!

Around the World by Matt Phelan.  Candlewick, 240 pgs.  Ages 9 and up.  (though with so many illustrations, much younger kids can enjoy it!) 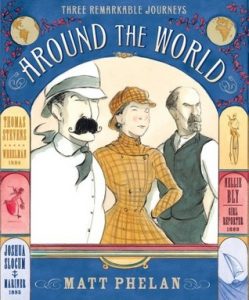 Many of you have read Jules Verne’s Around the World in 80 Days.  First published in 1873, you may remember the book’s plot involves an English gentleman, Phileas Fogg, who upon hearing that a railway across India has been completed, wagers his friends 20,000 pounds that he can make it around the world in 80 days.

While travel in our day is admittedly easier and less remarkable–planes, trains, and automobiles are seemingly ubiquitous–the desire to “see the world” and experience other places and cultures seems hardly to have abated.  By taking young readers back to the time when mechanized travel was opening new vistas on the world, Matt Phelan taps into the nostalgia of that bygone era and the literary heritage of Verne’s original novel, as well as man’s ever-present desire to see the wonder of God’s world.

And in terms of “seeing” the world, Phelan’s use of the graphic novel is uniquely apropos.  In Around the World, he follows the journeys of three explorers who made trips around the globe in the late 1800s, with maps showing their routes and quotes from and about them.  When I read through the text with my kids yesterday, I played an editor’s game with them.  I covered the text on a page, and asked them to make sense of the illustrations.  Then I covered the illustrations, and asked them to make sense of the text.  They couldn’t do it in either case.  Like any good graphic novelist, Phelan has created here three stories that depend equally on words and drawings. 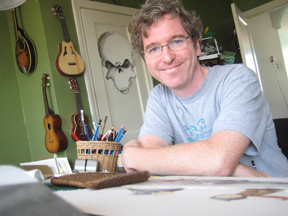 As for the art here, Phelan uses sketches that look as if they might have been taken from an artist’s travel journal.  I might not have realized this, except that I just watched The Ghost Army, and in that documentary, a troupe of artists traveled battle-torn Europe during World War II.  Remarkably, their illustrations–simple line drawings with watercolor when it was available–looked quite a lot like Phelan’s here.

That’s not to say that some aspects of the book couldn’t have been better.  I liked all the stories, but I found the first one to be a little less intriguing.  Maybe lacking in a relationship that would have interested kids (as opposed to the monkey who accompanied Nelly Bly, which fascinated my kids).  And while I found the third story’s use of flashbacks to be moving, they made the story a little harder to understand.

The overall effect, though, is one that my kids really responded to.  Even though my oldest wasn’t sure about the format–without all the words of a normal novel, “how can it build drama”? she wanted to know–when I took the book in my hands and introduced them to the idea of circumnavigating the globe, both of them perked up their ears.  (“You mean, they went ALL THE WAY AROUND THE WHOLE WORLD?”) And when I explained that we were going on just such a trip in our imagination, the book took on new interest for them.  Sometimes a book needs a little framing to become important in a child’s eyes, especially if it’s a kind of book they aren’t used to.  And that’s where I hope the discussion questions below will come in handy.

1.  What’s a Summer Reading Challenge?  If you haven’t already spilled the beans, you might want to begin your discussion of Matt Phelan’s book by introducing your kids to the Summer Reading Challenge.  Explain that like the explorers of Phelan’s book, we’re planning our own imaginary trip around the globe.  Let them look at a globe or map, and show them the places we’ll visit with our reading, and ask where they might like to go on a real trip.  (You can do this before or after they’ve read the book.)

2.  What is it?  Getting the most of a book starts with identifying the basic plot and message of the author: what is this book about?  Who are the important characters?  What were they trying to do?  Did they do it?

3.  Tell Me What You Really Think (critique):  What could the author/illustrator have done better?  What didn’t you like?  What did you like?  This might be a good time to introduce the idea of a graphic novel and play the editor’s game I mentioned above.  Cover the text with your hand, and see what the illustrations alone convey.  Then cover the illustrations and see if you can understand what’s going on.  You might even try “narrating” some of the drawings–how would your kids have conveyed the same idea with words?

4.  Look Again through God’s Word:  The idea of travel, adventure and seeing the world is something that gets a lot of people excited:  a) How does the Biblical story of Creation help explain that?  (Have you ever thought about why God made the world so big and complicated?  Why not a tiny world?  Why not a universe as big as your neighborhood?  What does the scale of the universe tell us about God?); and b) What about the idea of the fall–that by man’s sin, death (and danger) entered the world?  Why is it important that God made people with the ability to sin (instead of like robots who always do what they’re told)?  How does a world filled with darkness make room for the Light?

5.  Make it Personal: If the great story of history is that God is showing forth His glory through Creation, Fall, Redemption, and Restoration, how does that make our lives part of an adventure?  Do we have to leave home to have a life full of excitement and intrigue?  What role does humility play in the Christian adventure?  How does that lead us to greater glory?  (James 4:10) 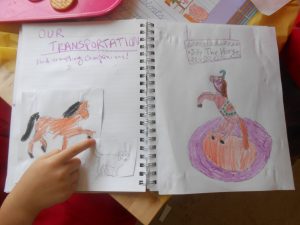 A big part of this read along for my family is the notebook we’re making of our summer adventures.  We’re using Phelan’s Around the World as an inspiration, using a hand-drawn map, stories from our summer (which I’ll help them record), and pictures and drawings of interesting things we imagine or see along the way.

If you’re interested in making a notebook/journal for your kids’ summer, you can make it exclusively about the Summer Reading Challenge, or you can make the summer reading just one part of the journal.

I decided to make ours more like the latter, and we plan to include: 1) each child’s hand-traced world map, with dotted lines to show our progress over the summer; 2) drawings of fun things we’d like to see as we make our reading journey, as well as drawings and pictures of fun places we actually go this summer; 3) emails/postcards from my dad’s journey overseas, along with pics he sends, 4) crafts and recipes, and 5) all the other random, cool things I want to remember from the summer!

One final thing I’m definitely including: funny stories from our summer adventures.  Tune in Thursday for our interview with comedian John Branyan about his hilarious version of The Three Little Pigs, as well as how he uses his own notebook (and lots of other hints for kids) to achieve hilarity in the written word.  We’ll also have a list of other resources–CDs, food, globes, etc–which might help you on your journey.

Til then, you can check out Janie’s list of picture books that might come in handy over the course of the summer.  And definitely see our list of alternate titles in the Summer Reading Challenge, which includes books for younger readers who  can’t quite read the official titles but might like to join in the fun.