Tuesday’s post about “Twisting Mother Goose” was headed down an alley I didn’t have room to address.  So today’s post springs off YA lit-blogger Georgia McBride’s offhand comment about the dark side of the “Disney stories,” and why they are never cited for their disturbing elements.  I’m assuming she means fairy tales, and her mention of Disney is interesting.  As long as I can remember, the classic stories told by Walt Disney have been sneered at by purists: they’re too “sanitized,” too “sweet.”  I never understood that—particularly in regard to the older films, in which the stories are told pretty much straight-up, with the addition of cute characters and show tunes.   (Admittedly, Disney’s Little Mermaid ends more happily than the original, but that was okay with me–Andersen is a downer, sometimes.)  I will never forget the terror of Snow White’s wicked queen turning into a witch, or Pinocchio and Lampwick being transformed to donkeys—those scenes made an indelible impression on my young self.  A certain element of terror was vital to the impact of the story.  Walt Disney apparently understood that, but he also understood the necessity for a happy ending, especially in a classic fairy tale.

The reason fairy tales are classic, and continue to be told through generations, is that they answer a need in the huma

n psyche.  We need great danger in stories to give us a sense of the precariousness of everyday life.  We need brave heroes and gracious heroines to shape our character.  And we need these desperate situations to be resolved in a way that gives us hope.  Fairy tales are moral above all, with basic lessons for human development:

“There is the chivalrous lesson of ‘Jack the giant Killer,’” wrote G. K. Chesterton, in Orthodoxy: “[G]iants should be killed because they are gigantic.  It is a manly mutiny against pride as such . . . There is the lesson of ‘Cinderella,’ which is the same as that of the Magnificant—exaltavit humile [the humble are exalted].  There is the great lesson of ‘Beauty and the Beast’; that a thing must be loved before it is lovable.  There is the terrible allegory of the ‘Sleeping Beauty,’ which tells how the human creature was blessed with all birthday gifts, yet cursed with death; and how death may also be softened to a sleep.”

Earlier in the same chapter (“The Ethics of Elfland”), he writes about the two invaluable truths he apprehended in the nursery through fairy tales.  “The first is this: that the things common to all men are more important than the things peculiar to any men.”  And: “Man is something more awful than men; something more strange.  The sense of the miracle of humanity itself should always be more vivid to us than any marvels of power, intellect, art, or civilization.”  In other words, humanity is a thing of wonder, even more than any individual human.

Fairy tales are about h 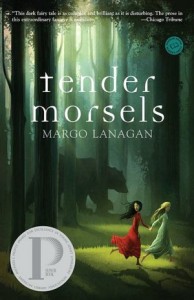 umanity.  Their power lies in their generic nature—it’s no accident that the hero is almost always disadvantaged but brave, the heroine is ill-treated but kind and generous, and we know little more about them than that.  Any faults they have will be corrected and all obstacles will be overcome on the way to happily ever after.  The proud will be leveled, the humble will be exalted, and the fatal mistake, whatever it was, will be paid for.

I’ve been trying to figure out what I don’t like about a lot of the fairy-tale retellings that have popped up in the last ten years or so, and this is part of it: they are so desperately individual.

“Snow White and Rose Red” is the story of two kind-hearted daughters of a widowed mother, who accept an enchanted bear into their home and show kindness both to him and the spiteful dwarf who cursed him.  The bear is redeemed by Christlike generosity, but the dwarf receives a punishment suited to his rejection of it.  Tender Morsels, a retelling published in 2007, keeps the traditional setting, but delineates two very distinct girls, one the product of rape and the other of incest, who find a way to work vengeance on the male world.  A story about the beastly becoming human becomes an expose of humans acting like beasts.  And then there’s . . .

Peter Pan, originally written as a play and first performed in 1904, is faithful to fairy-tale conventions, combining pirat 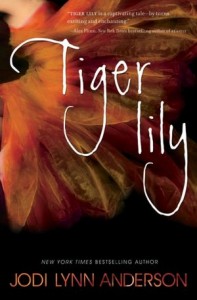 es, mermaids, Indians, fairies and lost boys into a glorious stew of every child’s fantasies—and tapping into every child’s fears of growing up.  Tiger Lily takes up the story of a secondary character, and by adding more, makes it something less.  As told by Tinker Bell: “This is a love story, but not like any you’ve heard.  The boy and the girl are far from innocent.  Dear lives are lost.  And good doesn’t win.  In some places, there is something ultimately true about endings.  In Neverland, this is not the case.”

Tiger Lily was found under a flower by the village shaman Tic Toc, which might seem lucky except that she is never accepted by the tribe.  Neither is her friend Pine Sap, a crooked misfit who loves her in spite of her taciturn, prickly personality.  The tribe comes by its suspicions honestly, for Neverland is full of dangers—vicious mermaids, pirate gangs, and the mysterious Lost Boys who are said to be cannibals.  But Tiger Lily is more adventuresome than most.  Early in the story, she rescues a drowning man from a shipwreck and nurses him back to strength.  Soon after, she meets the leader of the lost boys, and her world is unmade.

Like many contemporary heroines, Tiger Lily is conflicted—is her future with her own people, or does she carve out an alien path for herself?  Other worlds are calling: the world of Peter, who is mercurial and charming and often cruel, and the world of Philip, the man she rescued, who turns out to be a missionary.  Does she belong where she can make a difference, or . . .

Oh, well.  It’s not a bad novel at all, but by making Neverland a real though enchanted place, with real, individually defined people, Tiger Lily steals the depth from the Peter Pan story for the sake of contemporary “relevance.”  It’s hard to understand why it was even written.  Though interesting to see what is made of the characters we know and love, it’s ultimately disappointing: the magnificent Captain Hook (for example) is a wreck of his mythical self, Smee is a psychotic killer with no room for development, and Wendy, who enters late into the narrative, is a home-wrecker who steals Peter away to grow up after all.  And the whole thing is dead serious.

Fairy tales belong to the people, to do with as we please, but perhaps we should be a little more respectful of our human heritage.  The two major trends I see with fairy tales is, first, to “explore their darker sides,” as in Tiger Lily and Tender Morsels (and coming this January: Splintered, a journey to the “real Wonderland . . . a place far darker and more twisted than Lewis Carroll ever let on”).  The other trend is to make an enormous in-joke of them, a la Shrek or A Hero’s Guide to Saving Your Kingdom.  That’s not to say these treatments should be outlawed, or that they can’t be valuable or just plain fun.

But, to go back to Chesterton, here’s what he learned from generic, plot-driven, ages-old fairy tales: 1) The world is magical; 2) the world is meaningful; 3) the world is beautiful; 4) the world is worth our gratitude; 5) the world is to be cherished.  For all their talk of enchantment, none of this comes through in many of the stories retold for relevance or for laughs.