The Hero’s Guide to Saving Your Kingdom, by Christopher Healy (drawings by Todd Harris).  HarperCollins, 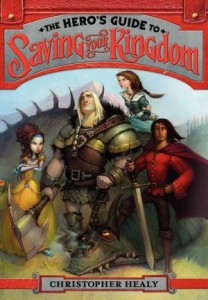 Bottom Line: A Hero’s Guide to Saving Your Kingdom offers a slightly snarky sendup of some beloved fairy-tale characters for middle-grade readers.

First, we need to clear one thing up: the princes in those stories—you know, stories about Cinderella, Sleeping Beauty, Snow White, and Rapunzel–were not all named Charming.  No; they had real names, people!  And the names were Frederic, Liam, Duncan, and Gustav, respectively.  The Hero’s Guide reveals how they joined forces and embarked on a quest to rescue their princess, save the bards, battle dragons, face down giants, thwart bandits and destroy an evil witch.

The fun begins when Ella, Prince Frederic’s bride-to-be, runs away out of sheer boredom with his overly-domestic lifestyle.  Prodded to pursue her by his valet (“There’s a bit of courage in you somewhere.  Find it”), Frederic rides to the next kingdom, where he stumbles over Prince Gustav, in a funk because his attempt to rescue Rapunzel was a big flop.  Meanwhile, valiant Prince Liam breaks his engagement to Briar Rose—he just woke her with a kiss, and now she wants to run his entire life!—only to fall out of favor with the peasantry, who were hoping for cheesecake at the wedding.  Then there’s Prince Duncan the Strange, who drives his dear Snow White so batty she’s asked for separate vacations.  The four make an odd quartet, who must first tolerate each others’ weaknesses before learning to pool their various strengths.  Overcoming differences to work together is a nice theme, but the story is mostly for laughs, in a style reminiscent of the Shrek movies.  Even though the author says he began the book partly out of “parental princess fatigue” with his daughter’s Disney addiction, girls should enjoy it as much as boys.  I hope it’s not too prissy to say that we shouldn’t forget the beauty and resonance of traditional fairy tales.