Rescue from certain destruction is the great theme of the Bible.  When it happens in real life, it should remind us of how blessed we are, and what we all escaped . . .

“Tuyet could not remember a time before the orphanage.”  Until the age of eight, her world was a wooden building in Saigon with lots of children, mostly younger, and almost no furniture.  They all slept on bare floors—“She would wake every morning with marks from the wooden slats on her cheek.”  Then one day, April 11, 1975, it all changed.  She could hear more activity than usual on the street outside—screams and shouts, trucks and tanks, explosions.  A white VW van pulled up and a man jumped out, yelling at the nuns in a language Tuyet did not understand.  Next minute, everyone was rushing around, packing up babies in boxes, stacking them on the van.  At the last minute, they loaded up Tuyet also.  She could not make sense of what happened until much later.

The VietCong and North Vietnamese were on their way to Saigon, and there was no force sufficient to stop them.  The defenders knew what this meant: Vietnamese orphans were to be parceled out among communist families who would raise them as good communists.  But the children of American servicemen were to be killed—and so were the disabled kids, like Tuyet, who had polio.  With both strikes against her, she would have been shot were it not for Operation Babylift, a coordinated effort by missionary groups and the Canadian Air Force to deliver these children from certain death to safe homes and adoption.

The story, from Saigon to Hong Kong and thence to Ontario, is alternately gripping and touching.  Before leaving the orphanage, Tuyet had never seen the night sky:

“Are those bombs?” she asked an aid worker.  “No.  Those are stars.  They are beautiful to look at and they will not harm you.”  Stars.  Tuyet remembered the bits of foil her teachers would stick onto her schoolwork when she did well.  Those were called stars, too.  She looked back up at the sparkling points of light.  Stars were real?

And this, when she met John Morris, the man who would become her father:

Tuyet knew about moms.  In the orphanage, many of the children would talk longingly of their moms.  But a dad was a different matter.  Tuyet had listened as some children talked about their dads, but they didn’t seem very real.  She had never seen one.  To her, a dad was like a made-up person, a ghost.

Such a degree of deprivation can be eye-opening for the children of prosperous America, as well as an accessible introduction to this part of American history.  (As somebody who was draft age at the time, it’s still hard for me to think of the Vietnam War as “history”!)  Tuyet, who lives in Ontario, is now married with children.  I’d like to know more of this success story:  How was her polio cured?  How did she adjust to school?  Did she come to know a heavenly Father through her Christian adoptive parents?  The author doesn’t say, but even coming this far with an orphan who was providentially saved is worth our time. 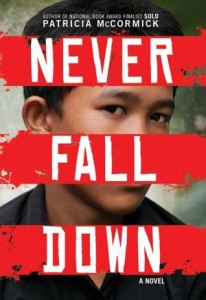 Like most 11-year-olds, Arn Chorn has no comprehensive view of politics or statecraft or warcraft, but all of them have combined in a perfect storm that will sweep him up into a 4-year nightmare.  After just a few pages to establish the setting, as well as Arn’s energetic nature and his family composition, the Khmer Rouge (Red Cambodia), many of them only a few years older than he, march into his city of Battambang.  They announce that “All families now will be split; parents must give their children to Angka [the ruling body of the Khmer Rouge].  ‘Bring only the clothes on your back,’ they tell us.  ‘Angka will provide everything you need.’”

The soldiers proceed to beat, shoot, and kill hundreds of citizens and round up thousands more, of all ages, to work in the fields.  Over the next few weeks, Arn is separated from his family and marched deeper into the countryside where it seems no one will ever find him.  “Do what they say,” his aunt whispers before she’s taken away.  “Be like the grass.  Bend low, bend low, then bend lower.  The wind blow one way, you blow that way.  It blow the other way, you do too.  That is the way to survive.”

To say this is tough reading would be an understatement.  Patricia McCormick has marked out a territory in tough, such as self-mutilation (Cut) and sex slavery (Sold).  She lets Arn Chorn-Pond tell his own story as he might have as a teenager, in broken English that has more impact than smooth eloquence.  The Cambodian killing fields marked a new low in the annals of inhumanity: “the worse genocide ever inflicted by a country on its own people,” according to the Introduction.  But worse than the direct impact on Arn’s body and mind was the damage to his soul, the things he was forced to do and witness.  On one occasion he watched the KR savagely beat a boy who had earlier informed on him (which led to Arn spending three nights in a manure pile).  “I watch this boy fall and for one minute I feel like happy, relief that this boy is now the one in trouble.  Then one minute more and I think: maybe now I am monster also.”

Two personal encounters saved him: one was his acquaintance with Mek, a musician who organized performances for the Khmer Rouge. Mek took Arn under his protection and taught him to play traditional Cambodian instruments (a devotion that continues to this day).  Through music he caught hold of something above the mud and blood, which helped sustain him through four years of hell.  Arn finally escaped into the jungle, survived for months by himself, and eventually staggered into a Thai refugee camp half-dead.  There he met the Reverend Peter L. Pond:

This American man, this First Man maybe he sit at my bed now every day . . . and he all the time praying.  “Jesus, Jesus,” he says.  I hear about this Jesus before in my town; he’s like head monk in the U.S.  So I think maybe this guy is like monk, like Jesus monk.  So sad on his face, so worry.  Than all of a sudden angry.  Like storm cloud, he yell at the doctor, make the doctor come over, and then he shout at him some more.  Jesus one minute.  Hell, damn, next minute.  Strange guy, this monk.

Arn survived—God always ensures survivors to tell the story.  He was adopted by Rev. Pond and educated in the United States.  It was not an easy transition, but Arn Chorn-Pond made something of his suffering, and for that reason his story is worthy of attention, even if, as it seems, he has not come to know Christ.  Some bad language and much violence : it’s not for everybody, and certainly not for every child, but it’s all true, and truth has value in itself.

See Emily’s review of Running for My Life for a similar, though ultimately more hopeful, story.  We review novels of young people in war situations in Shooting Kabul, 90 Miles to Havana, Escaping the Tiger,  and  Between Shades of Gray.  Also, Inside Out and Back Again is a verse novel of the Vietnamese “boat people.”