Tuesdays at the Castle by Jessica Day George 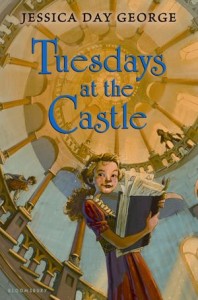 Whenever Castle Glower became bored, it would grow a new room or two.  The castle has a mind of its own, which can be frustrating when you want to redecorate.  But it’s extremely useful when an enemy kingdom takes advantage of the rightful rulers’ disappearance.  As the story opens, King Glower and Queen Celina are departing on a special journey to celebrate their oldest son Bran’s graduation from wizard school, leaving crown prince Rolf, age 14, in charge.  Rolfe is crown prince instead of Bran because the castle determined he had better leadership potential.  The castle is an excellent judge of character, as will be seen when 1) the royal party is attacked on their way home, and all presumed dead, 2) delegates arrive from neighboring kingdoms to pay their respects, and 3) evil Prince Khelish stages a coup to establish himself as the power behind the throne, and eventually the official king.  Rolf and his sisters Delilah and Celia fight back, and their secret weapon is a grand medieval structure built of stone.  Celia’s special affinity with the castle (it fills the rooms with flowers on her birthday) makes her a leader of the resistance and gives a whole new meaning to the phrase “castle intrigue.”  Khelish makes a rather transparent villain, and to no one’s surprise, luck and pluck win out—with a little help from dirty tricks involving manure.  Not a very memorable story, but light and good-natured.

Tuesdays at the Castle is a fantastic story written by Jessica Day George. It is full of massive amounts of magic, mystery and excitement. The story opens with the tragic death of the king and queen of Sleyne.

The main characters of this excellent story are the royal children, Celia, Rolf and Delilah, and most importantly the Castle Glower. This story takes place after the supposed death of the king and queen. It is a very tragic time for the kingdom. Suddenly, at the kingdoms weakest point, the king’s royal council turns against the royal family. Now it is up to the royal children to save the kingdom.

Through numerous plans, plots and failures it is up to the children to get support from other kingdoms and to get rid of the foreign prince staying in their castle, who is trying to take the throne. Will they succeed?

When the foreign prince finally makes his move to take the crown, the kingdom is ready to help the royal family. Then the neighboring kingdoms show up to help. Surprisingly, the king and queen are found alive and safe. In the end, they finally get their kingdom back from the evil council.

Intrigue, danger and suspense fills “Tuesdays at the Castle”, which sets the stage for the following volumes in this fascinating trilogy. Every Tuesday brings new rooms and new mysteries to the enchanted castle and the children who will do anything to defend it. What will next Tuesday bring? Read the book and find out!

Tailyn S. was one of Megan’s students last year and she accepted the challenge of writing a book review that would be shared on Redeemed Reader. Thanks, Tailyn!