Author Interview: Simonetta Carr on Heroes of the Faith 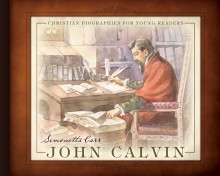 In today’s author interview, I talk with Simonetta Carr, author of several picture book biographies for kids on church fathers including John Calvin, John Owen, and Augustine of Hippo. Her newest book on Athanasius will be out soon with Reformation Heritage Books.

1. How did you get started writing Christian biographies for kids?

At first, I just realized there was a need for simple and accurate Christian biographies for young readers. There were a few, but they were mostly emphasizing some virtues of historical characters and told very little about their lives. I have homeschooled my children for a long time, so I was looking for something more informative, with a brief overview of the time period and theology of these men and women. Besides, some of the giants of our Church history had never been introduced to children. Again, years of homeschooling and Sunday School taught me that children can grasp more theological concepts than we think.

Originally, I asked other people to write these books – young Church history majors – but no one took up the challenge. I actually wrote the first book with my children. Then I sent a proposal to many publishers, and Reformation Heritage Books replied. I am glad they are the ones who did, as I am sure anyone will agree when they see the books. I don’t think any other publisher would have believed in this project enough to produce such top-quality products.

2. How do you choose your subjects?

I chose John Calvin because it was his 500th anniversary. After that, I tried to focus on people who have left an impact on church history. As I said, I am not trying to introduce role models – there are other books with that specific intention. My hope is that my books will help children to understand why we believe as we do. For example, the idea for my next title, Athanasius (scheduled to be published this fall), came while I listened to my children recite the Nicene creed in church. I hope that my book will bring that creed to life and help them to realize why Athanasius was willing to lose everything to defend it.

3. I have read on your blog that you try very hard to present your subjects as a mixture of both good and evil–not as white knights, but as real people struggling to live up to their callings. Can you explain?

Ha! I can see why you need further explanation. Sometimes I write a blog entry to see if my thoughts make any sense. I wrote two entries on this subject, and I came to some conclusions of what I want to do and avoid in my books, but that’s not to say I have achieved. I try to aim at the sky, hoping that at least I’ll reach the ceiling. Basically, just as the Bible is not a collection of stories about heroes to imitate, but is an unified account of God redeeming a people for himself in Jesus Christ, so church history is a single story about God and about his constant work of redemption and preservation of his church. So that’s first and foremost in my mind when I write these books.

There are several problems with biographies that present characters as glorified heroes, and I am not listing them here (you can refer to my blog for that). Probably the main problem is that they foster in children unrealistic expectations for themselves and others. I grew up Roman Catholic. At the time of my first communion, I decided that I didn’t want to be just a good catholic. I wanted to be a saint! I bought a book of lives of great saints, but I soon realized the bar was much too high and I actually felt discouraged. I definitely don’t want these biographies to have a similar effect. On the other hand, how much do we want to emphasize the character’s flaws to young readers? My blog was actually a soliloquy with myself, trying to answer these questions.

These questions became particularly persistent when I was writing about Athanasius. His biographers are divided between those who see him as an innocent persecuted victim, alone against the whole world, and those who portray him as an Iranian ayatollah. I could have explained that some of his enemies’ accusations might have been founded, or that he seemed to condone some violence in his followers, but it really didn’t seem to matter in a book for young readers. I finally concluded that it’s the author’s attitude that counts. I said there was violence on both sides and that Athanasius was a man of strong convictions and influence, both greatly loved and greatly hated, and that seemed enough. Most importantly, I made sure that I didn’t see him (and consequently portray him) as the hero of the story. I kept reminding myself that the main hero was God, and secondary heroes the Council of Nicaea and the resulting creed. In spite of all the violence, the confusion, the disagreements, and the defections, God preserved His doctrine and we still confess it today. That’s what we should celebrate.

The value of the church, with its confessions and creeds, is also an important element in Christian biographies for children. The great men and women of church history didn’t operate in a vacuum. Martin Luther didn’t just open a Bible and discover justification by faith, as if no one had ever recognized it before. Athanasius was not always alone against the whole world, but based his convictions not only on his own biblical studies, but on a very important church council, and continued to work closely with the church, finding approval especially in the West. It seems important that children understand the work of a theologian, specifically in embracing or opposing a particular view, and that this work includes much study, research, counselling with other Christians, a strong commitment to the historical creeds, and prayer. This is important if we want them to take our doctrines seriously.

Another thing I want to avoid in my books is a simple good guys vs. bad guys account. Again, I am not sure if that’s something I have achieved, but I am trying. It’s difficult because we all have a tendency to judge history by today’s values. On the other hand, this is exactly one of the advantages of studying history, just as traveling and studying other cultures – it broadens our minds to understand different choices and situations. It’s very important for a biographer to familiarize the readers with the inner struggles and feelings of the characters, their experiences and concerns, creating a deeper understanding. Someone said that one reason why we heartily sympathize with Augustine of Hippo while we are ready to criticize Athanasius (although they both embraced some of the same practices) is that Augustine was willing to bare his soul to his readers, while Athanasius said very little about himself. The human experience is the most interesting aspect of a biography and makes the subject memorable. Besides, in our age, it’s sometimes hard to fully understand the issues that compelled many men and women of the past to risk their lives. If we don’t explain them, some stories will be reduced to dry arguments between stubborn groups of people who disagreed over who was right.
4. What role do you think parents can play in helping kids understand that God works through fallible men?

Everything I said so far is just something I learned as an author. As a parent, I just try to discuss with my children what they are reading, answer their questions, and point to the larger picture. I certainly don’t mean to discourage children from admiring the great men and women of our Christian past. I just try to make sure they know who is the real Hero.

Any other questions out there for Simonetta? If so, feel free to leave a comment. You can purchase Simonetta Carr’s books at Reformation Heritage Books. You can read her blog, get study guides for her books, and learn more about her work at www.simonettacarr.com.