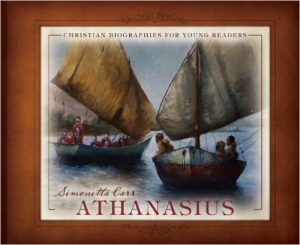 What makes a good children’s book?  We’ve talked a lot the past few days about what doesn’t make them.  But last week, I had the opportunity to interview author Simonetta Carr about her experience as a Christian writer as well as her new kids’ biography, Athanasius.

I have had a chance to preview the book, and I thought enough of it to include it in our LIGHT YOUR LIBRARY campaign.  We plan to give to copies away to the contest winner on Friday.  (Still not too late to enter!  See below for a link.)

Two things, at least, set Ms. Carr’s books apart from many other Christian children’s biographies.  First, the pictures and illustrations of the subject-matter are top quality, and I would put them up against any kids’ book out there in their ability to bring emotion and historical context to the reading experience.  Second, her books treat children respectfully.  She does not write down to them as many authors do.  She treats them as real people capable of sustained thought about complex ideas, yet she does so without writing over their heads.  Because of that, many parents will find them just as informative and engaging as their children will.

If you are looking for a book with bells and whistles and simplistic Jesus talk, this one isn’t it.  If you want a book that will inform your child, challenge them, and open up an entire era in Christian history–including critical ideas about who Jesus is–then my guess is that you’ll like this book as much as I do.

So, without further ado, my interview with Simonetta Carr:

1) St. Augustine claimed to have heard the words, Tolle Lege, “take up and read” at a pivotal moment on his life. What prompted you to “take up and write” the story of Athanasius for kids?

Actually, while it’s certainly unrealistic to compare my small decision to write this book with that momentuous turn in Augustine’s life, in both cases the inciting factor was a child’s voice. Augustine heard a child sing, “Tole, Lege,” and I listened to some young children at our church read the Nicene Creed along with the rest of the congregation. I thought, “It would be great to teach them how this creed came about.”

2) What are some of the parallels between his moment in history and ours today?

There are many similarities. The church in the 4th century faced some new and unexpected issues – understanding how to deal with emperors who tried to control the church rather than persecute it, or understanding the meaning of the word Christian, which until then had been almost equated with martyr. Today, the issues of the relationship between church and state and the identity of Christians are still relevant.
More pertinent to my book was the Arian controversy. Arius was a charismatic presbyter who believed that God the Son could not be the same as God the Father. To him, it was irrational and carried the danger of minimizing the differences between the two. Arianism in different forms is still present today, and even more so the desire to rationalize God’s revelation and to make it more visibly “relevant” to perceived human needs.

3) What were some of the challenges in writing this book?
The main challenge was finding reliable and accurate sources. Primary sources were not totally reliable, because both Athanasius and his enemies seemed more concerned in proving their point than presenting a comprehensive picture, which was perfectly acceptable in those days. To make things worse, hagiographies of Athanasius started almost immediately after his death and stuck for centuries, while only a few historians have engaged in a more serious study of the man and his time. Some historians gave even a rather discouraging picture – portraying Athanasius as a gangster or a 4th century ayatollah. Even after sorting truth from fiction, it took me a while to capture Athanasius’ mind and heart. Unlike Augustine, Athanasius didn’t wear his heart on his sleeve. An essay by Charles Kannengiesser has been particularly helpful in that respect. It helped me to find Athanasius’s heart, especially in his Easter letters.

4) With Banned Books Week upon us, could you talk a little bit about what it’s like to be Christian kids’ book author in America today?

I am not very familiar with Banned Books Week and this may not be relevant, but to me any author who is a Christian should strive primarily to do his job well, just as a Christian plumber or doctor. Specifically, writing history requires a commitment to accuracy. Recently, my book on John Owen came as one of four finalists in the 2011 San Diego Awards (children’s non-fiction) and is now in four San Diego County libraries. Normally, public libraries want some type of recognition before including books on their shelves. As I was wondering how I could get them to include other books – or even if church history would be of any interest to the general public – I was inspired by a quote by Diarmaid MacCulloch, professor of the History of the Church at Oxford. While I don’t endorse everything he writes, this quote spurred me to a fresh commitment, “It seems to me that the history of Christianity is absolutely essential to talk about because there is so much bad history about it, and arrogance, conceit, dogmatism are all based on bad history.” Thankfully, we have now some excellent academic books on church history. We need more on a layman’s level, and for children.

5) What role does the Gospel play in how you approach your work?
I would connect this answer with the previous one. Siince the gospel is the announcement of the life, death, and resurrection of Christ, I would say that it moves me to do my job well, for the glory of God and the benefit of others, and to point my readers to Christ. Ideally, my books are not so much about heroes of the faith, but about God preserving his church in Christ, using fallible men and women and in spite of our failures. This is what I strive to do. I still have a long way to go, but I constantly review my motives and goals throughout the writing process.
*************************************
Thanks so much, Simonetta, for being willing to chat with us again!  If she’s piqued your interest, find out more about her and her work in our previous interview with Ms. Carr, Simonetta Carr on Heroes of the Faith.