Buried beneath the Baobab Tree by Adaobi Tricia Nwaubani

Buried Beneath the Baobab Tree is a tough but vital read for thoughtful Christian teens. 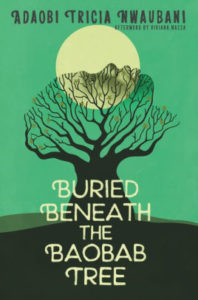 Our nameless protagonist, the only girl in a family of five brothers, has dreams: saving up to buy a new pair of dress shoes.  Passing her entrance exam to the university in Maiduguri.  Perhaps even marrying her pastor’s son, a handsome college man with a laptop.  She’s lucky because her father and mother are proud of her good grades and ambitions.  Her family is poor but not destitute and her life in Nigeria reflects the general improvement in African life for the current generation—except for the rise of a militant Islamic group called Boko Haran.  Papa’s radio—which he never turns off—broadcasts news of their atrocities in between cultural tidbits from the U.S.  It seems the Nigerian government isn’t doing much to stop this band of renegades.  And it seems, from the reports, that they’re coming closer.

But no one was suspecting anything on the day Boko Haran roared into the village on motorcycles with  machine guns blazing, slaughtered Papa and four of the brothers, and marched the girls away.

Based on the April 2014 kidnapping of 276 girls from a Christian boarding school in Chibok (NE Nigeria), the remaining two-thirds of the narrative follows the girl and her friends deep into the Sambisa forest.  There they are forced to convert, made slaves of the Jihad, and eventually married off to Boko Haran fighters.  The story is told in short vignette chapters with a simplicity and starkness that communicates intense emotion.  The author, a Nigerian journalists and novelist, bases the story on interviews with “Chibok girls” who escaped or were exchanged.  Without going into graphic detail, the despair and horror come through.  The protagonist, though a Christian and regular churchgoer, quickly “converts” when her life is at stake, but immediately has to witness one of her neighbors cut down while singing “Jesus Loves Me.”  It’s not a simple context: her closest Muslim friend is swept up in the net, and receives no more mercy than the Christians do.  The narrator is careful to draw a distinction between her Muslim neighbors and Boko Haran: “They have nothing to do with Islam.”  While she herself doesn’t seem to draw any particular strength from Christ, back home the church is praying.  And hope isn’t dead.  This is a hard read but an important one, and it should inspire us to pray harder.

!
!
Get Equipped
Something went wrong. Please check your entries and try again.
Posted in (G) Ages 16 and up, Discussion Starters, Realistic Fiction, Teen/Adult