Amal, a Pakistani girl with dreams of an education, finds her dreams derailed in this engaging story for middle graders. 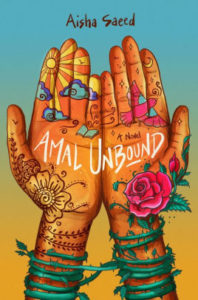 Maybe, if Amal’s mother had given birth to a boy instead of a fifth girl, she would not have fallen in a depression that forced Amal to stay home to run the household.  Then she would have been at school instead of on her way home from the market when the BMW knocked her off the road.  Than she wouldn’t have been so angry as to get into an argument with the passenger, who happened to be Jawad Sahib, youngest son of the Khan family.  The family to whom almost everyone in town owes money, including Amal’s father.  The son who doesn’t take defiance lightly.  The penalty for Amal’s insolence is to leave her family and go to work on the Khan estate for no one knows how long—thus ending her dream of finishing school and becoming a teacher.  It’s a bitter pill, and no consolation when Amal’s mother takes a liking to her, because the girl she  displaced as lady’s maid is now plotting revenge.  Still, “my mother’s word from arguments with my sisters came to mind—you have to find a way to get along; you can’t cast off your family.”

In our culture it may be hard to believe that some parts of the world, like Pakistan, still live under a quasi-feudal system of indentured servitude and thralldom to the local landowner.  Seeing this culture through the eyes of a young girl with relatable flaws and dreams makes it real to the reader, and her decision at the end is a small step toward justice.  “Everything we do in our communities and beyond to impart good is important,” writes the author in her afterward, after referencing another Pakistani girl with a zeal for education.  This is as true in Pakistan as it is in the West.  Though Amal and her family are Muslims, religion doesn’t get much exposure; it’s more of a cultural story, told in an engaging way.  I would have liked a glossary to explain some of the unfamiliar clothing and food terms, though.  (Recipes would be even better!)