Illegal, a graphic novel, puts readers into the perils of a refugee from Africa while stimulating important questions about refugees worldwide. Ages 12-15 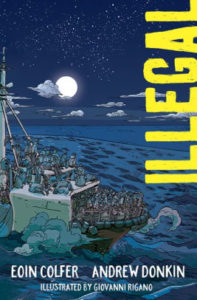 Ebo, his brother Kwame, and their sister are orphans since their mother died.  Now their uncle “takes care” of them, though the only thing he’s interested in taking care of is the bottle.  First Sisi left, and the village bullies are taunting Ebo about how she may be making her money.  Now Kwame has disappeared also, after leaving a note that he’ll send money—in a helicopter—as soon as he reaches Europe and gets a job.  But Ebo is not going to stay put.  One way or another he’ll find his brother and together they’ll locate a new home for themselves and their sister.  Against all odds, he does find Kwame in the sprawling city of Agadez, in central Niger.  But their troubles have just begun.  Now they must cross the Sahara in a decrepit truck and wait for any seaworthy craft to carry them to Italy.  If the craft is a rubber dinghy or an overloaded cargo boat, they’ll take their chances and hope it doesn’t capsize.

Illegal begins with a well-known quote from holocaust survivor Elie Wiesel, to the effect that no human can be “illegal.”  Maybe some other word, like “undocumented,” would be better, but there’s no clue what that other word should be.  Ebo and his brother are not fleeing persecution or violence, but extreme poverty.  Left to one side is whether Italy, or any other nation, has a right to police its borders, or whether Ebo was wise to take off on his own in the first place.  Events suggest not, but a 12-year-old boy can be excused for not exhibiting prudence.  The grownups less so: illicit smugglers, neglectful relations, and perhaps the authors of this graphic novel.  Still, it’s a worthwhile story about an important issue (see discussion questions below), though mature themes and grisly situations make this story more appropriate for early teens.